Foodie Confidential: 'I can be quite a housewife' 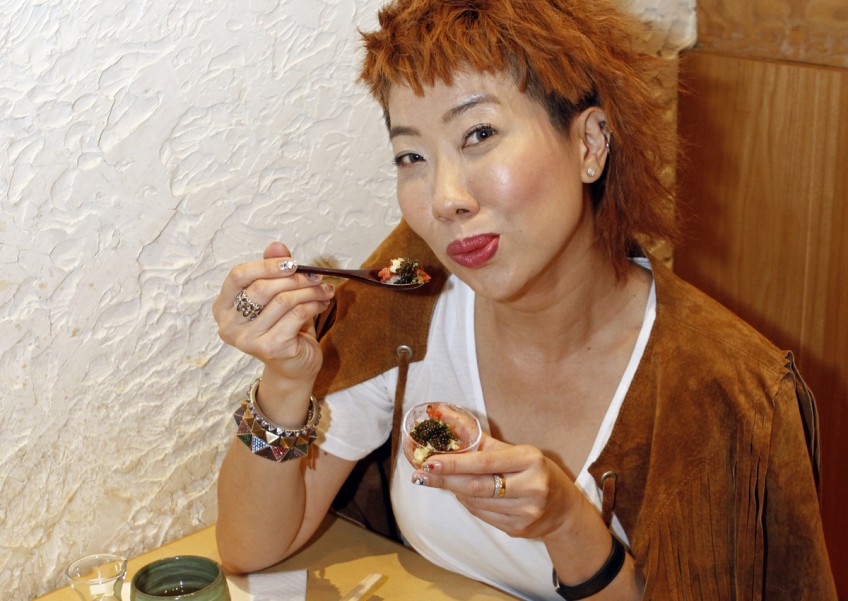 Spunky actress-host Patricia Mok, 44, enjoys cooking for her friends and family and she confidently reels off a list of her signature dishes, which include her "legendary" stir-fried clams with basil and oregano, and yong tau foo curry in a gravy that is a cross between sayur lodeh and laksa.

She learnt to cook laksa when she took cooking classes in a community centre more than 20 years ago. She can also make mooncakes and tau sar piah (mung bean pastries).

She says: "I did quite well in home economics and sewing classes in secondary school; I can be quite a housewife."

For Chinese New Year reunion dinner tonight, she will step up as her family's main cook as her housewife mother, 72, is recovering from surgery on her thigh.

Mok will be cooking her family's festive must-have dish, braised pork belly with mushrooms. Turning a little serious, she says: "I have been taking over some of my mother's cooking duties for the family and this is a good opportunity to learn this dish. She's happy that I am doing so."

She is the third of four children - all are girls - and her father, 76, is a retired civil servant.

Mok also gets some cooking action in Let's Eat, a comedy movie directed by Hong Kong funnyman Chapman To. The film is showing in cinemas. She plays the long-time manager of a popular Hainanese chicken rice eatery that gets an overhaul after its modern-thinking heiress takes charge.

She gets into the Chinese New Year mood by having up to 15 yusheng (raw fish salad) during the festive season. She makes it a point to order the dish when dining out with friends.

The Fly Entertainment artist, who is single, says: "You can lohei only during this time of the year. It is fun and I can practise reciting auspicious Chinese sayings as I use them during my hosting gigs."

How do you celebrate Chinese New Year with food?

For reunion dinner, my family has a steamboat and barbecue meal with close to 15 ingredients, including prawns, fishballs, fish, beef and pork slices and ramen. This is on top of my mother's braised pork belly with mushrooms, which I will be cooking for the first time. There will also be yusheng and we have extra salmon and lots of abalone. I also like to fry fish and prawn keropok (crackers). They have to be from Indonesia or Brunei as these crackers have a stronger flavour.

What are your favourite Chinese New Year snacks?

I love goodies such as mini peanut puffs, kueh bangkit and love letters, but I abstain one week before my hosting gigs as they give me a sore throat. Thankfully, I am not into eating tidbits.

What is your biggest festive craving?

Pig trotters braised in vinegar and ginger, usually cooked by celebrity make-up artist Peter Khor's mum for hairstylist David Gan's Chinese New Year Eve gathering. I usually stay away from this dish as it is bad for my throat, but it is so good that I always take the pot of leftovers home so my family can have it over the next two days.

What are your favourite Singapore hawker foods and where do you go to eat them?

I like the chicken rice and roast meats from a coffee shop in Hougang Avenue 4. It is the first stall that I patronise whenever I come home from overseas trips. Its in-house roast meats are well done and I like its chicken wings and drumsticks. I also like the fishball noodles from Fishball Story in University Town at the National University of Singapore. The fishballs are soft and packed with fish paste.

What are your favourite cuisines?

I like Japanese cuisine and go to Akashi Japanese Restaurant in Orchard Parade Hotel for omakasestyle meals. I like the otoro (tuna belly), which melts inthe mouth and is great with caviar; and fish milt, which tastes like tofu and is said to be great for the complexion.

I also like Korean barbecued meats and go to Manbok in Neil Road for its pork belly and chicken. Soju is a must on my table. (Actress) Ann Kok and I always have the plain instant ramen and egg. I have tried to replicate this dish at home, but Manbok's soup is so much tastier.

What's the best thing you have eaten and why was it so good?

During my solo holiday trip to Seoul in August last year, I discovered a hotpot restaurant, Don Soo Baek, in Hongdae district. The pork rib soup was milky white and so sweet and flavourful. It went very well with the banchan (side dishes) and rice. I do not like to dine out alone, but I returned three days later to try the pig stomach soup.

What's a memorable encounter you had with fans while dining out?

Once, I was eating with fellow host Bryan Wong in a food court during a break from filming. I noticed that a woman, who was seated at a table in front of me, was snapping photos of us eating.

While most celebrities are obliged to take photos with people, I draw the line at taking unflattering shots of us, such as when we are eating.

Is there something you will not eat?

Honeydew melon. I have hated the smell and taste since I was young as my mother forced me to eat it and I cried and threw up. This unpleasant memory still remains.

Yes, I usually cook dishes such as grilled salmon and cod fish, baked chicken and aglio olio pasta with seafood. I also like to add abalone to my porridge and pasta. When I am on a diet, I cook yong tau foo.

If you could choose anyone around the world to have a meal with, who would that be?

K-pop star G-Dragon. I am a big fan as he is so talented and is a fashionista. I read that he is into foodand has caviar, foie gras and truffles in his refrigerator. I will take him to eat zi char and seafood dishes such as chilli crab, get him drunk and take him to a party.

This article was first published on February 7, 2016.
Get a copy of The Straits Times or go to straitstimes.com for more stories.