Foodie Confidential: I want to tell off Gordon Ramsay 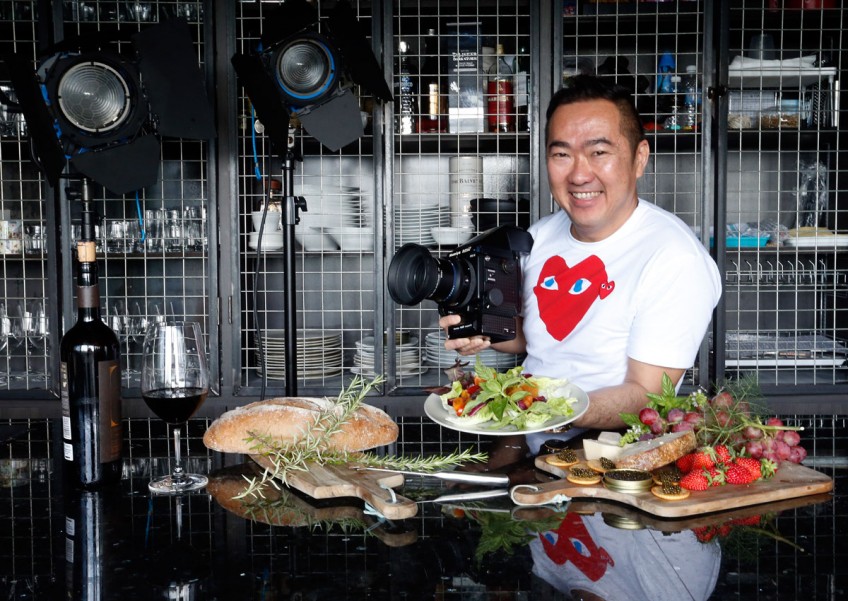 The name Edmond Ho may not be familiar among those not in the food and beverage industry, but chances are most foodies would have seen the works of the well- known food photographer.

Flip through the many cookbooks by Singapore's top chefs or a brochure or menu of some of the fine hotels and restaurants and, chances are, the beautifully styled photos of the food are taken by Ho.

In his 24-year career, he has shot photos for more than 25 cookbooks. The latest is Singapore-based chef Andre Chiang's Octaphilosophy, launched last Wednesday. Ho, 48, also travels regularly in Asia to take photos for hotel groups such as Mandarin Oriental and Peninsula.

Raised in Kedah, Malaysia, the Singaporean came to the Republic after finishing college to work as an assistant photographer in a Japanese studio. He set out on his own in 1995 and opened Jambu Studio in 2004.

His older brother is chef Anderson Ho, 51, who has worked in Raffles Hotel and the now-defunct The Fig Leaf fusion restaurant in the 1990s. The two brothers opened modern European restaurant Le Papillon in 2006, but that closed two years later. Anderson recently left Sats Catering at Changi airport to join Snorre Food, an importer and exporter of seafood. Edmond is divorced and lives with his three children, Elle, 19, Emmanuel, 17, and Ezekiel, 12.

How did you get into food photography?

When I started photography 24 years ago, I looked at the scene and decided food was going to be the next big thing. When I started, I had only one camera, I couldn't afford to buy more equipment. Not many people were shooting using daylight then, but the best way to shoot food is actually in daylight because it is the natural colour you see.

My first break was a Boursin cheese competition that my brother won. He asked me to take the photos for a small catalogue and that was how I started, shooting the cheese with dishes that my brother created.

My second break came from restaurateur Paul Hsu in Hong Kong. At the time, Chinese menus didn't have colour photos, just text. He was one of the first to put photos in the menu of his restaurant, Ye Shanghai.

Now everyone does it.

What are your more memorable projects?

I photographed the whole process of preparing fugu (puffer fish) once. I had heard so much about fugu, so though I knew I wouldn't die from it, I didn't eat it after the shoot.

I've tried the fish since, but I didn't think it had much taste.

What are the more memorable cookbooks you have shot for?

The one for Hong Kong singer Sandy Lam's cookbook, My Shanghai: Through Tastes & Memories, was challenging. We shot in Shanghai for 10 days and it wasn't just food shots but also photos of her in the city and the places she eats at. We had to see her mood every day before we shot.

The make-up artist would check in the morning. If Sandy's mood was not that great, we started later. Everything had to be done according to her mood and schedule. Also, she had a big fan base in China, so when we shot in the wet market, there had to be crowd control.

What is most difficult about shooting food?

For me, it's not taking the photos, but managing the clients. Because there are so many people involved. For example, in hotels, they range from the general manager and the F&B director to the marketing people and the chefs. Everyone has something to say. The hardest part is to please everyone.

For the food itself, one of the most difficult to shoot is ice cream because it melts quickly.

It's tough to shoot Chinese dishes. I find that they are not delicate and the colours and textures are not refined, unlike Japanese food, which is so dainty; or French food that is plated so beautifully. In Chinese food, everything is big and chunky, and not that sexy to photograph.

Did your love for food grow because of your profession?

In a way. The best thing about this job is that the perks are so good. You get to try different foods.

And as a food photographer, when you love food, you would have a passion for everything you do. It's like if you are a fashion photographer, you need to know what is in season and the brands.

What is your favourite food?

Japanese because it is very pure and healthy. The Japanese are very serious and passionate about their cooking. If a restaurant specialises in tofu, it does it really well and it can do it for generations.

When you eat Japanese food, you learn so much. You can go deep into the culture, which is so strong, and as a photographer, you feel the connection with your work if you go beyond just the taste.

Where do you go for Japanese food in Singapore?

Lately, it's Marui Sushi in Cuppage Plaza. The chef is probably the only person who can make me so relaxed at the end of a work day. He would drink sochu and entertain and serve the best fish of the day. I always order omakase because once you know the chef, you know you'll get good food and it won't cost you a bomb.

On a recent trip to Tokyo, a Japanese film producer took me to a sushi place called Sushiya no Yoshikan in Meguro that was really good. To me, it deserves two Michelin stars. And it's not expensive, less than $200 a person.

Also in Tokyo, I discovered a restaurant called Negishi in Shibuya, serving just beef tongue, and that is good too.

In Hong Kong, I must have my three fixes in Ye Shanghai in Tsim Tsa Tsui: crispy eel, drunken chicken and the croaker fish.

If you could choose anyone in the world to have a meal with, who would that be? Gordon Ramsay. Because I want to tell him how bad the food is in his restaurant here, Bread Street Kitchen. When I dined there with my daughter, the food was so bad, I sent it back.

On his TV shows, he is always so harsh on the cooks, so I want to do the same to him and see how he feels. But I also want to talk about the food scene with him because he's an interesting chef.