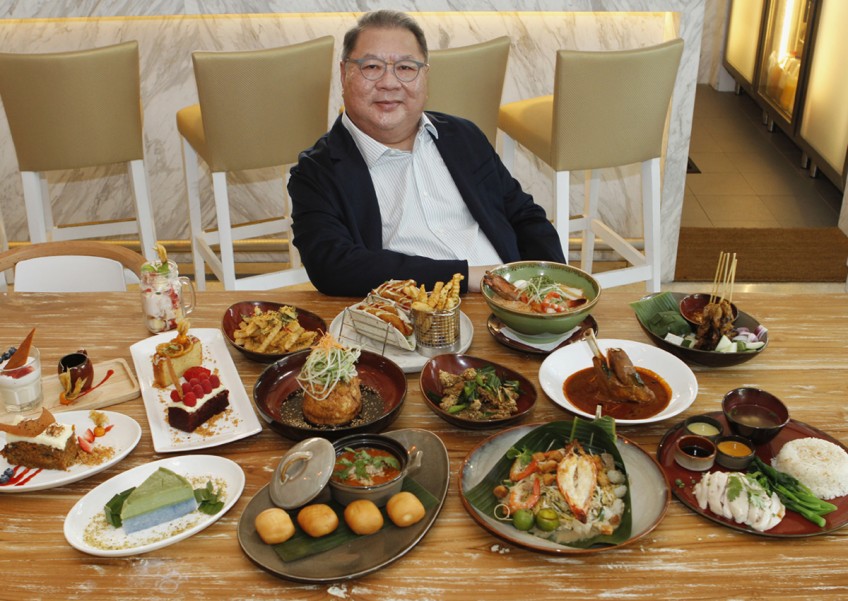 Staff members of Tangs over the past three decades would know that Mr Tang Wee Sung is an avid baker.

That is because the chairman of the home-grown department store would take his little loaves of Christmas fruit cake to the office every year and distribute them to staff with cards.

"I don't bake them myself anymore," the bachelor, 63, confesses. "Now I direct."

The person doing the work these days is his Filipina housekeeper, whom he trained to whip up his recipes. Health problems, which include diabetes and a kidney transplant in 2009, have stopped him from regularly whipping up feasts himself for family and friends.

But it has not diminished his passion for food and cooking.

He still hosts parties, especially at Christmas. "Christmas Eve, I have family over; the next day, I have friends," he says.

"I learnt that if you have two parties back to back, you don't have to do flowers again and some of the dishes, you just divide the ingredients into two days. Some dishes taste better overnight too."

One dish he always serves is roast turkey. "It's my childhood turkey that's stuffed with glutinous rice, Chinese sausage and chestnuts."

Mr Tang is the second son of Tangs founder, the late retail tycoon Tang Choon Keng, and as a child, he was not allowed to go out for security reasons. His father was kidnapped in 1960 and was freed unharmed after the family reportedly paid $150,000 in ransom.

So the young Wee Sung spent his growing-up years at home baking.

His love for food has also left its mark at Tangs in another way. In 1993, when he was group managing director of Tangs, he opened Island Cafe, an eatery, within the store premises.

The cafe, which recently reopened after renovations to put in an alfresco area, is known for its local fare such as laksa and seafood char kway teow as well as Western food such as braised lamb shank. New on the menu is addictive French fries coated in salted egg yolk.

Mr Tang, or Mr Wee Sung, as he is known among the staff, still takes a keen interest in the cafe, going through the selection of dishes and how they should be described in the menu.

What was the first thing you cooked and how old were you?

I started with baking, with a toy set that came with a recipe. I was 10 and the first thing I baked were raspberry buns. Though they were rock hard, they were edible.

I thought, hey, I could actually make something to eat, it was magic. That's what I like about baking, that you throw ingredients together and it comes out as something wonderful.

What dishes are you known for?

My trifle, which I have been making since I was 16, from my own recipe. It was a very simple dessert. I got everything from Fitzpatrick's (a now-defunct supermarket in Orchard Road) - sponge roll from the bakery, frozen strawberries, Bird's custard and whipped cream. That was how I started but, of course, now I make everything fresh.

There's also my Christmas fruit cake. I put different things in it, such as figs, apricots and pineapple for the colour. It starts with soaking the fruit in alcohol. I now blend the alcohol, starting with sherry first, then a mix of rum and brandy, so it's more rounded than just brandy alone.

What is most important is to leave the cake to mature, ideally for two months. And I have to keep "feeding it", brushing it with the alcohol.

Why do you prefer baking to cooking?

Because the results last longer. Cooking is more messy. But I do cook too. I have more than 500 cookbooks and I look at the recipes to get ideas. The books also taught me how to organise a meal, how to balance the menu and how to present the dishes.

Who did you cook for?

I did my first dinner party for about 20 people - my school friends - when I was 16. I served oxtail stew, marron glace with rum in a bowl and, of course, my trifle.

Have you had any disasters in the kitchen?

I liked to experiment and try recipes for the first time when I invited people over. Once, I made Beef Wellington, which I had never made before. I took the hot beef and tried to roll it in puff pastry, and the pastry got soggy and the beef juices started running. It was a mess.

And once, I didn't cover my baked Alaska dessert properly and it started to leak all over.

Do you dine out often?

Not that much these days because of health reasons. But when I do, I just want the best. That doesn't mean expensive restaurants because I get bored sitting around for a long time.

I went for a fine-dining dinner that lasted three hours with five courses. The food was tasty, but it was pretentious. One dish was supposed to be served with carrot salad. I couldn't find carrot salad, but there was one carrot curl.

What do you think of food trends?

I'm not crazy about molecular gastronomy. It's good as an experiment, but it's no longer food.

I like the new move towards natural ingredients, organic meat, vegetables grown in the restaurant's own garden, the foraging in other countries.

Where do you dine at these days?

I like natural flavours and I like Teochew food. My favourite Teochew restaurant is Chao San. You ask the owner Ah Liang what's good and he comes up with surprising things. The last time, he served me eel with lots of lard and pork.

I also love the suckling pig there. But unfortunately, the restaurant recently moved to Phillip Street and it can no longer barbecue the pig over the drain in the back, like in the old location in Beach Road.

I would take the head home and reheat it so it gets crispy again.

I also like to go to Capri Trattoria & Pizzeria in Binjai Park for Italian food. It's homey food.

For fine dining, I like L'atelier de Joel Robuchon in Resorts World Sentosa. It's more fun than the formal Joel Robuchon Restaurant and you can have small plates, which I like.

Do you enjoy hawker food?

I used to. I liked oyster omelette. Once, the day was so hot, I had six bowls of cheng tng at one go at Newton Circus.

But my immune system is suppressed after my kidney transplant, so I have to watch the food hygiene, especially when I travel abroad.

I still eat but not so much anymore. For example, I like the deep- fried arrowroot you get during Chinese New Year and I could eat the whole pot. Now I eat one-fifth of that or less at a time.

My housekeeper cooks more healthy food for me. I had chicken paprikash recently and she also cooks Filipino food. I also taught her to cook a mean Cantonese porridge with pork and shrimp chopped together.

I grew up with a Cantonese nanny and, later, she became the cook and she was very good.

Do you have any favourite places abroad to eat at?

There's a place in Manila called Milky Way Cafe. It has a dish called crispy pata that is normally cooked with pig foreshank, but it uses suckling pig and the skin is so crispy and the meat so tender.

The last time I went to Japan, I stumbled on a neighbourhood tavern outside Tokyo. It uses only the cheap bits of the cow, such as the aorta, spleen, sweetbreads, but there was so much care taken in the preparation, it was brilliant. It was the cheapest dinner I had in Japan and it beat all the famous restaurants I went to.

I ate what was called "jewellery" in a restaurant in Florence, Italy. It was bull testicles. There were also cow udders and sweetbreads, all boiled. The testicles were tough and the udders were like solidified milk.

And at a restaurant in Beijing's Summer Palace, I had imperial cuisine at a lunch that included a dish called twin noses - elephant and tapir noses that were cooked in a starchy white sauce. It was horrible, I called it noses in snot sauce.

If you could choose anyone in the world to have a meal with, who would that be?

American television presenter Alton Brown. He has a programme where he goes really in-depth into food, including using science to explain what happens in cooking. He is very tongue-in-cheek and his shows are very funny.

This article was first published on March 6, 2016.
Get a copy of The Straits Times or go to straitstimes.com for more stories.