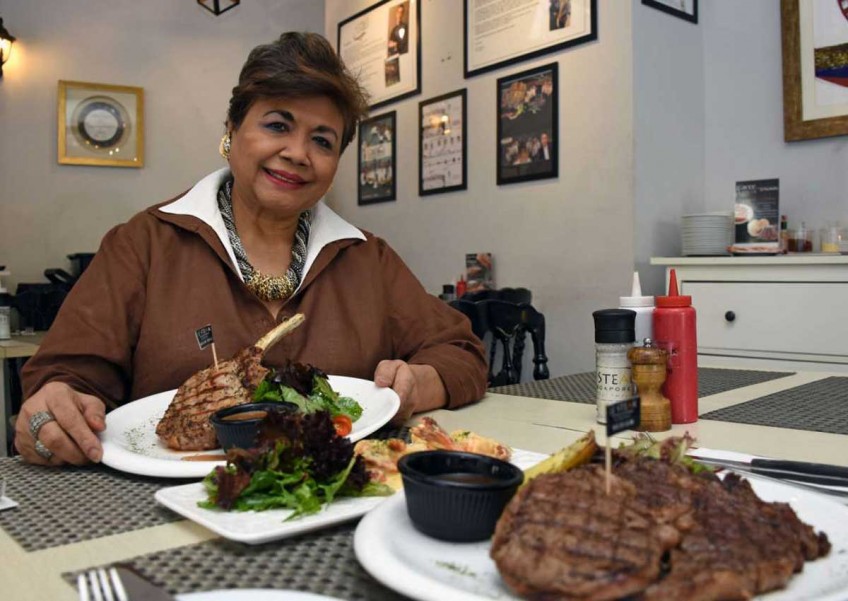 In 1979, Aziza Ali did something that no one had done before. She turned Malay cooking into a fine-dining cuisine.

Before that, unless you cooked it at home, local Malay food was something you got to taste only at hawker stalls or nasi padang eateries. Even today, other than Mamanda, a restaurant near the Malay Heritage Centre, and some hotel buffets, it is almost impossible to find an upmarket setting to enjoy Malay cuisine.

Back in 1978, a 20something Aziza decided that Singapore needed a fine-dining Malay restaurant. She had no experience in running a business, having worked in a series of jobs that included being a relief teacher and a clerk, as well as part-time jobs that had her working once as a house detective for two months.

But she had also learnt to cook from her mother, a housewife, since young.

Her late father, a superscale draughtsman in the civil service, would entertain often at home and also take the family out to fine restaurants. That led her to start thinking why there was no Malay restaurant people could entertain at and she decided she would open her own.

She bought an old house in Emerald Hill Road for $155,000 with a bank loan and in January 1979, Aziza's the restaurant opened.

Although the restaurant was a success, attracting Singapore and foreign celebrities and winning a tourism award for Best Dining Experience in 1996, the building was re-zoned for residential use soon after it opened.

She was taken to court three times for not complying with enforcement notices. "I fought because it didn't make sense," she says.

She won the first two suits, but lost the third, which forced her to move her restaurant to Albert Court after almost 18 years in Emerald Hill. But in 1997, Singapore was hit by recession and the restaurant closed the following year.

Aziza, 66, now works as a food consultant to restaurants here and in Kuala Lumpur, and also paints.

A self-taught artist, she has held two solo exhibitions, in 2008 and 2010, of her acrylic artworks. She says she had wanted to take up art professionally when she was young, but her father objected.

She also gives motivational talks at establishments such as the Institute of Technical Education and conducts workshops on cooking and food presentation for magazines such as Manja.

Aziza, who has never married, has written English cookbooks on Malay food and is working on a book titled The Flavour Of My Heritage, on her heritage and food. Her grandmother is Chinese and she has Javanese, Arab and Malay blood as well.

On March 18, she was inducted by the Singapore Council of Women's Organisations into the Singapore Women's Hall of Fame, a portal set up to recognise outstanding contributions by women to the country.

How did you learn to cook?

When I was four, I started helping my mother in the kitchen. One of my tasks was to pluck the roots off taugeh (beansprouts) and I had to pluck 2kg of it because there were more than 10 people at home. Besides my parents, five sisters and two brothers, there were also two uncles and three cousins. Now I hate taugeh, I have taugeh phobia.

I learnt cooking from my mother, but I upgraded her recipes. She was a fantastic cook. When I opened Aziza's, I hired her to cook for three years.

She would come in three times a week and cook difficult dishes such as bamia (an Arabian stew with meat and ladies' fingers), sambal goreng and nasi briyani Johor, which is less oily than the Singapore version and comes with a boiled egg and a whole spiced boiled potato.

What did you want when you opened Aziza's?

I could not afford a first-class restaurant, but I wanted a fine- dining restaurant with taste. I planned everything. I worked on the interiors with a designer friend. I designed the lighting and the uniform. I got the kebaya uniform for the staff made in Kuala Lumpur, where it was cheaper.

Every morning at 5.30am, I went to the wholesale market, which was in Beach Road then. I slept for only three or four hours.

How do you feel about the fact that there has not been any other Malay restaurant as successful as Aziza's?

I feel sad. I'd opened the gate, but nobody followed to open the door.

Have you thought of reopening Aziza's?

I had many offers to reopen, but it has to be a partnership with synergy. And it has to be with someone who trusts me, someone with a good heart.

Do you still cook regularly?

I cook every day for myself, mainly seafood and vegetable dishes. I cook meat only when I have guests.

I don't entertain much, but sometimes, my niece comes over. I cook all kinds of food - Western food, Malay food. I make my own pizza, for example. Right now, I have two batches of pasta sauce in the freezer, which I can use to whip up a pasta dish if anyone comes over.

Where do you go when you eat out?

I like Le Steak in Mackenzie Road, which is a halal French restaurant. The steak there is a bit expensive, but it's very good quality meat. It is consistent and tastes nice.

I usually don't eat meat, but when I desire a piece of good meat, I'd go there. Maybe once in a few months.

I also like Crab In Da Bag at Big Splash, which serves seafood that you eat off the table with your hands. I like the concept. You can take the family there and have fun. It's casual and easy.

If you could choose anyone in the world to have a meal with, who would that be?

I've always wanted to meet Nelson Mandela. He had such patience, perseverance and wisdom. He was in jail for many years for fighting for his people and yet he forgave his enemies.

This article was first published on March 27, 2016.
Get a copy of The Straits Times or go to straitstimes.com for more stories.