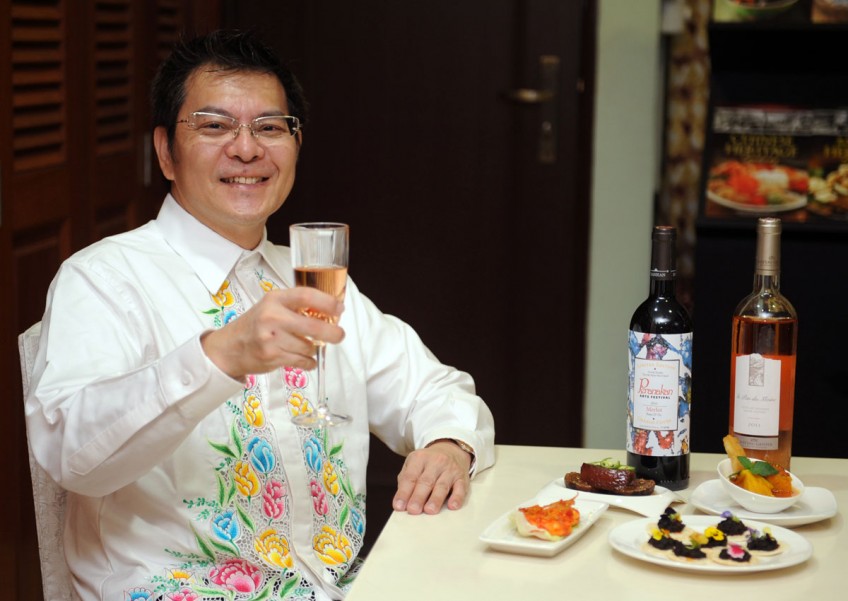 Most chefs start dabbling with cooking out of interest, but Mr Philip Chia had no choice.

He was adopted by a Peranakan babysitter from birth and starting from when he was five, his adoptive sisters made him pound sambal belacan with a mortar and pestle twice a day.

They beat him with a cane on the arms and legs if he did not pound the sambal belacan finely enough.

He says they were nasty to him because their parents doted on him more than they did them.

"In those days, you had to obey instructions from your seniors," he adds.

His adoptive mother died when he was 14 and he was sent back to live with his biological family, who were also Peranakan. By then, his housewife mother had also died.

He started learning about Peranakan cuisine from his five aunts and began to understand cooking techniques and ingredients instead of just following instructions. To this day, he still keeps an exercise book in which he jotted down recipes.

Now 55, Mr Chia is a prominent Peranakan chef who writes cookbooks and serves as a consultant for dining promotions in hotels.

He was a former head chef at the now-defunct Straits Express restaurant that served Peranakan, Hainanese and Penang food in Kallang Wave Mall, and had also done stints as a guest chef in hotels.

Before embarking on a career in cooking, he worked for 16 years as a ticketing manager in the travel industry, before deciding to start a travel-related business.

However, that failed and, in 2003, he started giving cooking demonstrations for cookware companies in department stores, before starting to teach cooking.

Next month, he will be leading free food workshops on the history of mee siam and laksa at the inaugural Peranakan Arts Festival, to be held in Empress Place.

The five-day festival, which is organised by the Peranakan Association Singapore and theatre company GenerAsia, will also feature Peranakan plays, art exhibitions and a bazaar.

These canapes are bite-sized versions of classic dishes such as assam pedas with dough fritters, udang chilli garam (chilli prawns) and buah keluak (black Indonesian nut) on crackers, which will be paired with wines that include a Le Pas du Moine rose from Chateau Gassier in France.

He will be making the canapes himself during the wine-pairing sessions from his own recipes.

"It is important to keep evolving and improving the cuisine to keep Peranakan culture alive," he says.

"It is my hope to take Peranakan cooking to the fine-dining level."

How did you get the idea of making Peranakan canapes?

I got inspired by the canapes and light bites served in fine-dining restaurants during my stints as a guest chef in hotels, so that gave me the idea of doing something different from the usual sharing portions.

Why did you decide to pair wines with Peranakan food?

My friends in the wine industry told me chilled and light-tasting wines match the heavy flavours of Peranakan food.

Rose wines go well with seafood dishes such as udang chilli garam, and white wines bring out the sour, salty and bitter flavours of buah keluak fried with spices.

Why do you think it is important to showcase Peranakan cuisines in a new light?

We need to think of ways to make cooking Peranakan food appealing for the younger generation so that they will continue serving these dishes in cafes and restaurants.

I was a part-time cooking instructor in Temasek Polytechnic three years ago and I realised that my students like food to look beautiful but be prepared with less laborious cooking methods.

I simplified Peranakan cooking as young people are lazy these days.

I have reduced the number of spices used in recipes such as assam pedas, and instead of grinding shallots, they can just slice them thinly.

Cooks can also buy pre-packed buah keluak paste instead of cracking and digging them from the nuts.

What are some ways of making Peranakan food healthier?

When cooking curries, I use yogurt, almond milk and ground cashew nuts instead of coconut milk to give it a creamy texture.

As long as I can retain 70 per cent of the taste of the original dishes, I am fine with these new ingredients.

What are your favourite Peranakan dishes and where would you go for them?

I like nasi ulam from a coffee-shop stall in Jalan Tua Kong called Chendol Melaka as its rice has the right balance of herbs and spiciness, and the fish is well-fried.

I also like Peramakan in Keppel Club which serves dishes that taste close to what I had at home, such as sambal udang belimbing.

Besides Peranakan food, what else do you like to eat?

I like bak chor mee from a coffee shop in Clementi Avenue 2. It comes with a good amount of vinegar, chilli and pork lard.

I also like dim sum such as steamed crabmeat dumplings from Min Jiang in Goodwood Park Hotel.

What is the most challenging Peranakan dish to cook?

Dishes that contain buah keluak. It is difficult to strike a balance between retaining the bitterness of the buah keluak and frying it with the right amount of tamarind juice and sugar.

I rent out rooms in my house and cook for my tenants once a fortnight.

I usually have a welcome dinner for them and cook dishes such as chap chye (Nonya vegetable stew) and beef rendang.

I also make bak zhang (rice dumplings) and pineapple tarts for my neighbours.

If you could pick anyone to have a meal with, who would that be?

My adoptive mother, as I did not get a chance to thank her for bringing me up.