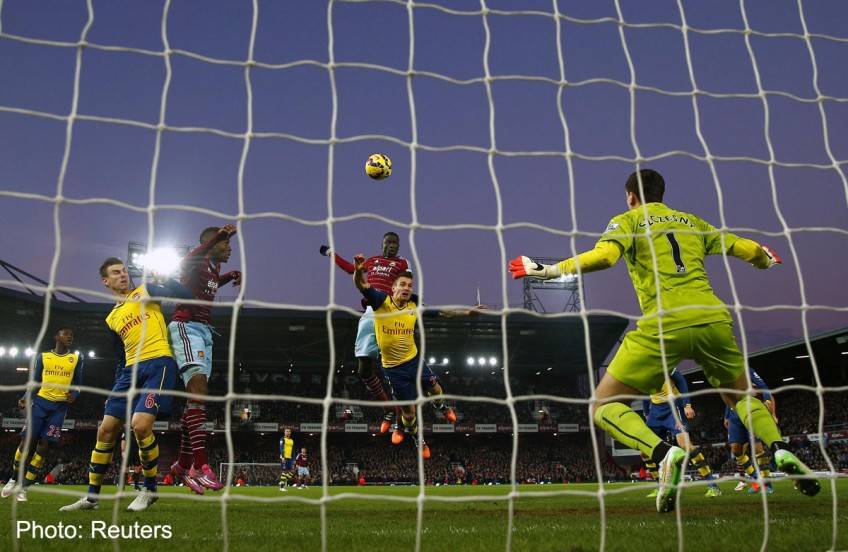 LONDON - Arsenal withstood a second-half onslaught from West Ham to boost their Champions League charge with a 2-1 victory at Upton Park on Sunday.

Arsene Wenger's side secured their second successive win over the festive period to move up to fifth in the Premier League, behind fourth placed Southampton only on goal difference.

West Ham, surprise contenders for the coveted European places, had been punching above their weight all season but back-to-back defeats have dented their challenge heading into 2015.

They were undone by two goals in three minutes late in the first half by Santi Cazorla and Danny Welbeck.

Senegal midfielder Cheikhou Kouyate scored his first West Ham goal to give the hosts renewed hope in the second half but, despite mounting pressure, the Gunners held on for a hard-fought win.

West Ham midfielder Alex Song thought he had opened the scoring against his old club in the sixth minute.

Replays suggested the assistant referee had made the right call but Song protested angrily following the decision.

But Carroll shrugged off the attentions of Koscielny before the former Liverpool player saw his low shot scrambled clear.

Arsenal had barely got out of their own half but Alexis Sanchez sparked them into life when he was afforded too much room before driving a deflected shot just wide of Adrian's left-hand post.

West Ham were still in control with James Tomkins wasting a glorious chance when he blazed over from a good position.

But the Hammers would regret not taking their chances as Arsenal opened the scoring through Cazorla in the 41st minute.

Cazorla was tripped up by Winston Reid's trailing leg for a clear penalty which the Spanish midfielder calmly converted.

And it went from bad to worse for the hosts as Welbeck struck two minutes later.

Alex Oxlade-Chamberlain's cross saw the England striker have the simple task of slotting in at the far post in the 44th minute.

Stewart Downing should have done better than shoot wide just before the break as West Ham tried to respond.

But just eight minutes into the second-half, Kouyate gave Allardyce's men a lifeline.

Tomkins found room to deliver a cross and Kouyate rose above Arsenal right-back Mathieu Debuchy to scramble his header home.

The hosts dominated possession as they pressed for an equaliser, but West Ham's Adrian was the busier goalkeeper.

He kept out Cazorla's shot and then denied Oxlade-Chamberlain's 74th minute header.

Sanchez and Welbeck wasted chances to give Arsenal some precious breathing space but, despite a surviving a scare when Enner Valencia headed over in the final attack of the game, the visitors held on.