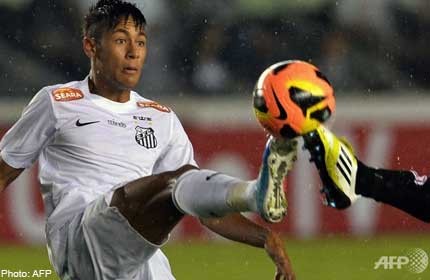 MADRID - In contrast to previous seasons, Barcelona played their trump card in the transfer market early this year by securing the services of Brazilian starlet Neymar for 57 million euros (S$95.7 million) back in May.

The 21-year-old had been on the Catalans' radar for some time with Barca having even made a down payment of 10 million euros to Santos for first option on the player a year previously.

However, the confirmation of his transfer was hastened by the feeling that Barca needed to react quickly to having been thrashed 7-0 by Bayern Munich in last season's Champions League semi-finals.

Initial scepticism as to whether Barca really needed another forward option rather than a defender subsided after Neymar's stunning performances as Brazil won the Confederations Cup in June.

One question that remains unanswered though is how Neymar's talents will dovetail with four-time World Player of the Year Lionel Messi?

As much as the Argentine is often lauded for not being the stereotypical egotistical modern footballer, the success that both player and club have had in recent years has very much depended on building the side around Messi's talents.

The need for Messi to play in a deep-lying central striking role hastened the sale of Samuel Eto'o, resulted in Zlatan Ibrahimovic ending his sole season in Catalonia on the bench and has also limited Cesc Fabregas' chances to play where he has successfully combined with Xavi and Andres Iniesta with Spain.

Those sacrifices though have been worth a return of 271 goals over the past five seasons and concerns over how Messi and Neymar will co-exist appear to have been overblown for a number of reasons.

Firstly, as much as they still need defenders, Barca also desperately needed a scoring option that isn't Messi.

Over the past five seasons in which Messi has starred, Barca have won the Champions League twice and on both occasions Messi was outscored by his striking partners over the course of the season.

By contrast in the last two seasons, while Messi has rattled in more than 50 goals each time, Barca's second top scorers were Villa with 16 and Cesc Fabregas' 15 in 2011/12.

Moreover, unlike Ibrahimovic or Fabregas, Neymar is naturally much more compatible with Messi as he likes to start on the left of a front three and cut inside towards goal.

With Villa's departure to Atletico Madrid last month, that position is now vacant in the Barca side and Neymar's movement should also help drag defenders away from focusing their attention solely on Messi.

Most importantly of all though, is that Neymar seems to be accepting his rung in the Barca hierarchy.

After being hammered 4-0 by Barca in the Club World Cup final just under two years ago, Neymar admitted he and his Santos teammates "had been given a football lesson" and that he "aspired to get to Messi's level."

Fast-forward to 2013 and Neymar insisted at his official unveiling as a Barca player that he had come to Barca to "help Messi continue being the best in the world."

Asked about his first impressions of Neymar this week, Xavi told Catalan sports daily Sport that "the important thing is that he is humble, he will fit perfectly into the Barca philosophy."

Should the South American duo hit it off, that philosophy will, more than ever, be based on winning with an exciting brand of attacking football.