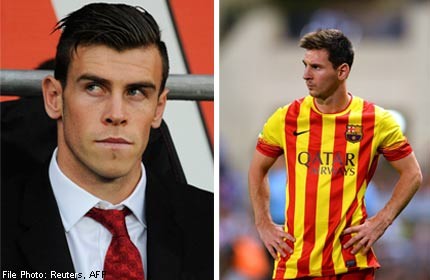 MADRID - World Player of the Year Lionel Messi will miss Barcelona's trip to Malaga on Sunday as he continues to recover from a thigh injury as Real Madrid remained poised to welcome Gareth Bale.

Messi was substituted at half-time in Barca's 1-1 draw with Atletico Madrid on Wednesday and Barca boss Gerardo Martino confirmed the 25-year-old had not been included in his squad as a precaution.

"He is developing well," Martino told a press conference on Saturday.

"It is just a precaution. We are optimistic, but it is just three days since the injury occurred and it would be risky to play him, especially so early in the season."

Messi's absence should mean a start for Cesc Fabregas in the false nine role he often occupies for Spain.

However, Martino was tight-lipped on whether or not Neymar would be handed his first start for the club after coming off the bench to net his first Barca goal on Wednesday.

"Just because Messi isn't there doesn't mean Neymar has to take the reins," said the coach.

"Neymar is improving all the time, but we need to take things bit by bit to ensure everything goes well in the end. My intention is that when he plays he is able to show all that he can do."

Real Madrid meanwhile are not in action until Monday night when they travel to face Granada.

However, it is looking increasingly unlikely that they will travel to Andalusia with Bale amongst their ranks as there was still no confirmation of his move from Spurs on Saturday.

Spanish media reported that the 24-year-old had already arrived in Spain and was waiting in Marbella for the world record deal to be completed before flying to Madrid to be presented to the fans and the media in the coming days.

Real will be without Xabi Alonso for up to three months after he broke a bone in his foot earlier this week and minor injuries to Sami Khedira and Asier Illarramendi mean manager Carlo Ancelotti's midfield options are limited.

Meanwhile the Italian also has to decide whether to stick with Diego Lopez in goal or recall club captain Iker Casillas after he was surprisingly benched for Real's 2-1 win over Real Betis last weekend.

In the night's action on the field, Real Sociedad failed to make it three wins in a week as they were held 1-1 by promoted Elche.

The Basques took a huge step towards qualifying for the Champions League group stages for the first time in a decade in midweek as they won 2-0 away to Lyon.

However, they were on the back foot straight away in Alicante as Ferran Coro scored the hosts first goal in the top-flight for 24 years.

Sociedad improved mightily after the break though and were deservedly level 16 minutes from time when Carlos Vela turned home Xabi Prieto's cross.

Espanyol moved alongside Sociedad on four points after two games as they came from behind to beat Valencia 3-1.

Helder Postiga scored his first goal for Valencia against the run of play after just 10 minutes.

However, David Lopez's equaliser ensured Javi Aguirre's men went in level at half-time and second-half goals from Cristian Stuani and Thievy Bifouma rounded off a fine victory for the Catalans.

And Villarreal continued their fantastic start since returning to the top flight as a Giovani Dos Santos penalty and Cani's strike six minutes from time gave them a 2-1 win over Valladolid.