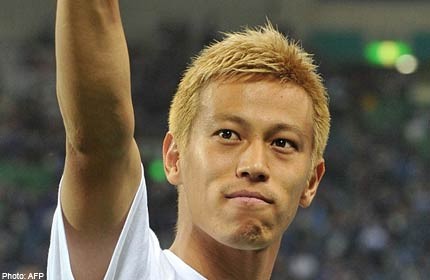 The president of Russian football champions CSKA Moscow has rubbished claims by his star midfielder Keisuke Honda (above) that he is close to sealing a move to AC Milan.

MOSCOW - The president of Russian football champions CSKA Moscow has rubbished claims by his star midfielder Keisuke Honda that he is close to sealing a move to AC Milan.

The Japanese international said in an interview with the Nikkan Sports daily that negotiations over a move to Serie A were in "the final stage" and that contract details were "being settled", with a transfer fee of US$5 million (S$6.3 million) reportedly on offer for the soon-to-be out of contract player.

However, Yevgeny Giner retorted by telling Russian daily Sport Express that no agreement had been reached with Milan, whom he accused of showing a "disrespectful attitude".

"I'm already sick and tired of the speculation around Honda," the newspaper quoted the CSKA president as saying.

"We were waiting for the Italian side to understand they have to stop all this talk but unfortunately it did not happen.

"We expressed our position three weeks ago. We will not sell Honda to Milan. Neither for five million (dollars) nor for 10. Period.

"Our club will never tolerate any disrespectful attitude from anybody," Giner added.

"We were ready to meet their demands halfway in case Milan representatives acted in a civilised way. We were ready to study an official offer in case they produced it. But they decided to provoke Honda into a conflict with us."

The 27-year-old Honda, who has been training in Tokyo this week, had said: "I have already admitted having negotiations (with AC Milan) and it's true that they are entering the final stage.

"As far as I have heard, Milan has mostly satisfied" the financial terms, added Honda, whose contract with the Russian club expires in December.

Last month, the player scored a double to help his side claim the Russian Super Cup with a 3-0 victory over Zenit St Petersburg.

After more than three years with the reigning Russian champions, Honda has been eyeing Europe's top clubs as he looks ahead to next year's World Cup in Brazil. He has in the past been linked with several English Premier League sides.