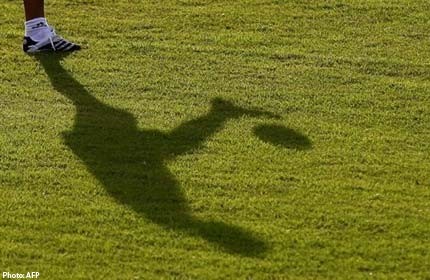 Internacional scored a stoppage time equaliser to hold Botafogo to a 3-3 draw in the Brazilian championship but coach Dunga was still grumbling about the behaviour of the ball boys at the Maracana.

"The ball boys' job is to put the ball on the ground and not play for the home team," the former Brazil coach told reporters, claiming the ball boys 'disappeared' when hosts Botafogo led 3-2 in the closing minutes..

"I don't know who controls them but they are part of the spectacle. At the end of the match the ball boys disappeared. Who is responsible for that? I don't know.

"I spoke to the fourth official and he said he would take action but he didn't." Fabricio scored in the fourth minute of stoppage time after both teams had led in a dramatic match which left Botafogo top of the table.

Vitinho gave Botafogo a ninth-minute lead before Argentine forward Ignacio Scocco scored twice in three minutes to put Inter 2-1 ahead at halftime in front of a sparse 15,000 crowd.

Dutchman Clarence Seedorf, 37, equalised from a penalty before Vitinho fired Botafogo 3-2 ahead with a long-range shot.

"Botafogo were looking for free kicks and wasting time. If they had won, it would have been the right tactics," added Dunga. "But the tactics are only right if you win."

Six-times former champions Sao Paulo remained one place off the bottom after drawing 1-1 with Atletico Paranaense in Thursday's other game, extending their winless run in the competition to six games.