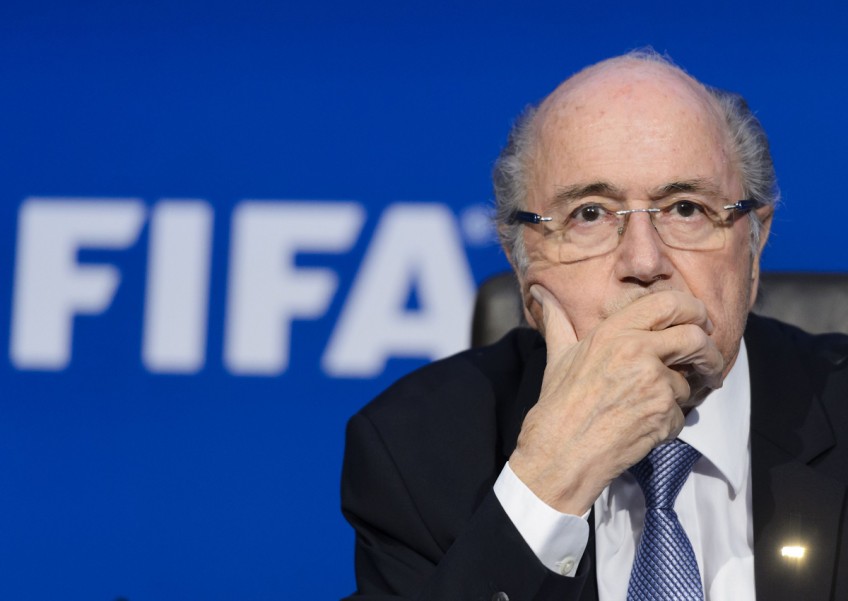 ZURICH - Beleaguered FIFA president Sepp Blatter was placed under a criminal investigation on Friday in a dramatic escalation of the corruption scandal engulfing world football as would-be successor Michel Platini came under scrutiny for receiving a murky multi-million-dollar payment.

After months of probes following raids in Zurich which led to the indictment of more than a dozen top officials, Swiss investigators said their attention had now turned to actions carried out by Blatter and Platini.

"Swiss criminal proceedings against the President of FIFA, Mr. Joseph Blatter, have been opened on September 24, 2015 on suspicion of criminal mismanagement...and - alternatively - misappropriation," said a statement from Switzerland's attorney general's office (OAG).

Blatter, 79, had already announced his decision to stand down because of corruption allegations against other top officials and Platini had been the favourite to win an election to be held in February to succeed him.

Swiss prosecutors said Blatter was being investigated over the 2005 sale of World Cup television rights to the Caribbean Football Union, then run by former ally Jack Warner, a deal which had been "unfavourable for FIFA".

Blatter was also suspected of a "disloyal payment" of two million dollars to Platini in February 2011 allegedly made for work the Frenchman carried out for FIFA between 1999 and 2002, before he was elected as head of UEFA.

Platini later Friday issued a statement insisting the payment had been for "contractual" work he had carried out for FIFA - but offered no explanation as to why the payment had arrived almost a decade after the work was complete.

Swiss authorities said Blatter was questioned as "a suspect".

The statement added that Platini had been questioned "as a person called upon to give information".

Blatter's lawyer Richard Cullen said in a statement that the FIFA boss was cooperating with Swiss authorities and that a review of the evidence would show "no mismanagement occurred".

Platini meanwhile defended the payment issued to him in 2011, which was made three months before the Frenchman announced he would not challenge Blatter for re-election during that year's race for the FIFA presidency.

"Concerning the payment that was made to me, I wish to state that this amount relates to work which I carried out under a contract with FIFA," said the UEFA boss.

"I was pleased to have been able to clarify all matters relating to this with the authorities." However, a former FIFA insider, who requested anonymity, told AFP that Platini's hopes of being elected to replace Blatter next year had been damaged by Friday's revelations.

"Platini took a serious blow" by even being mentioned in the Swiss statement, the source told AFP.

Blatter "is finished now ... Platini will struggle to recover from being questioned." Friday's turn of events came after a press conference, that Blatter was scheduled to give, was suddenly cancelled.

Platini is a former Blatter ally who turned against the veteran Swiss sports baron over the past 18 months as FIFA's troubles mounted.

The investigation is also into Blatter's links with Jack Warner, a former FIFA vice-president now at the centre of a US investigation.

The attorney general said Blatter was suspected of making a deal "unfavourable to FIFA" with the Caribbean Football Union, which Warner used as his power base.

A Trinidad court on Friday announced that it would rule on December 2 on whether Warner should be extradited to the United States.

Warner is one of 14 football officials and business executives charged by US prosecutors of involvement in more than $150 million in bribes for football broadcasting and marketing deals.

Nearly all of the suspects are from central and South America. Until recent days, FIFA's top leadership had escaped accusations flying around the world body, which earns $5 billion from the World Cup.

Swiss officials arrested seven FIFA officials, who are among the US suspects, on May 27 in Zurich just ahead of the world body's congress.

Blatter was re-elected to a fifth term at the congress despite the storm but then announced on June 4 that he would stand down.

Since then, FIFA has announced steps to make reforms but has been shaken by new corruption claims.

FIFA this month suspended Blatter's right-hand man Jerome Valcke after he was accused of involvement in an accord to sell tickets for the 2014 World Cup at inflated prices.

Valcke strongly denied the allegations but FIFA handed over emails from the suspended secretary general that had been demanded by the Swiss attorney general.