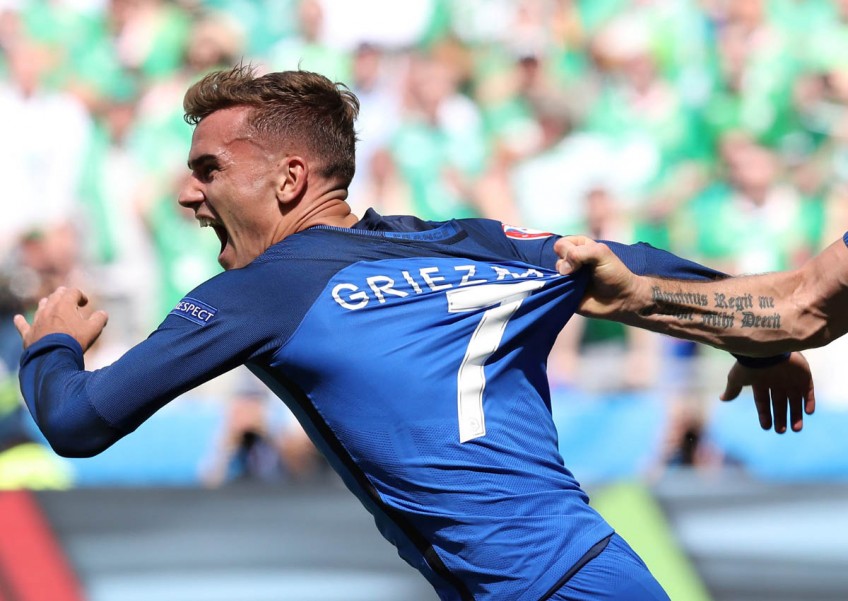 Antoine Griezmann brushed off comparisons with French football legend Michel Platini after his two goals sent the host nation into the final of Euro 2016.
AFP

MARSEILLE, FRANCE - His two goals in the 2-0 win made him by far the tournament's top scorer with six goals, three behind Platini's record of nine in one Euro tournament.

"I am happy with the goals but I am still a long way from Platini," he said.

Griezmann's first-half penalty and a poked effort in the second half secured the win and a place in Sunday's final against Portugal.

"I hope one day I can get closer to it (the record)," Griezmann said.

"We're delighted, we're like kids here, but now we have to win the final, which we'll start preparing for as of tomorrow." Griezmann missed a penalty for Atletico Madrid in their Champions League defeat to Real Madrid in May.

"I wanted to take a penalty again in an important moment and I'm happy I did, and happy I scored," he said, after holding his nerve from the spot following a Bastian Schweinsteiger handball.

"For the second goal I was hanging back to wait for an error from the goalkeeper," he said.

German keeper Manuel Neuer punched Paul Pogba's cross into Griezmann's path and he slotted the ball through his legs.

"I have to stress that it's a victory for everyone, the whole staff at our training base including the players who've been working really hard during training even though they don't get to play a lot.

"I'm really happy for everybody.