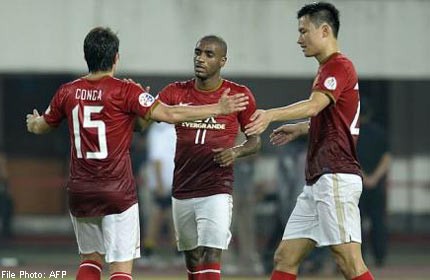 Brazil's Muriqui, top-scorer in the AFC Champions League with eight goals, said the Chinese champions had matured under the World Cup-winning Italian as they look to reach the tournament's semi-finals for the first time.

Guangzhou, 14 points clear in China's Super League, host Qatar's Lekhwiya in the first leg of the quarter-finals on Wednesday.

"I believe this season Guangzhou are stronger than last year because we are more stable, mature and confident," said Muriqui.

"We gained valuable experience from our first season in the AFC Champions League, which will help us to pay attention and overcome any disadvantages and defeat our opponents in the competition, especially against West Asian teams.

"And we have a world-class coaching team. Marcello Lippi is one of the best coaches in the world and he brings with him advanced training and tactical theory to Guangzhou Evergrande.

"As a rigorous team manager, he infects a winning faith into every Evergrande player and assists the team to become stronger and stronger."

Chinese teams have struggled to make an impression at this level with Liaoning's victory in the 1990 Asian Club Championship the country's only success so far in a continental club tournament.

But with Evergrande spending heavily over the past three years to build a strong squad under the guidance of Lippi, there is genuine hope that they can correct that dismal record on just their second appearance in the AFC Champions League.

Evergrande have yet to concede a goal at home in this year's competition but Lekhwiya, coached by Belgian Eric Gerets, could pose a stern test for the home side after a strong run to the last eight.

"We do not know a lot about Lekhwiya, but I am sure that they are a great team as every team who has reached this stage have good players," said Muriqui.

"Every match in the knockout stage will be great and I am looking forward to competing to become the winner of the AFC Champions League this year."

The game at Guangzhou is one of four intriguing East versus West clashes on Wednesday as the race hots up to succeed South Korean side Ulsan Hyundai as Asian club champions.

In Japan, Emperor's Cup-holders Kashiwa Reysol will put their unbeaten record in this season's competition on the line when they take on Saudi Arabia's Al Shabab.