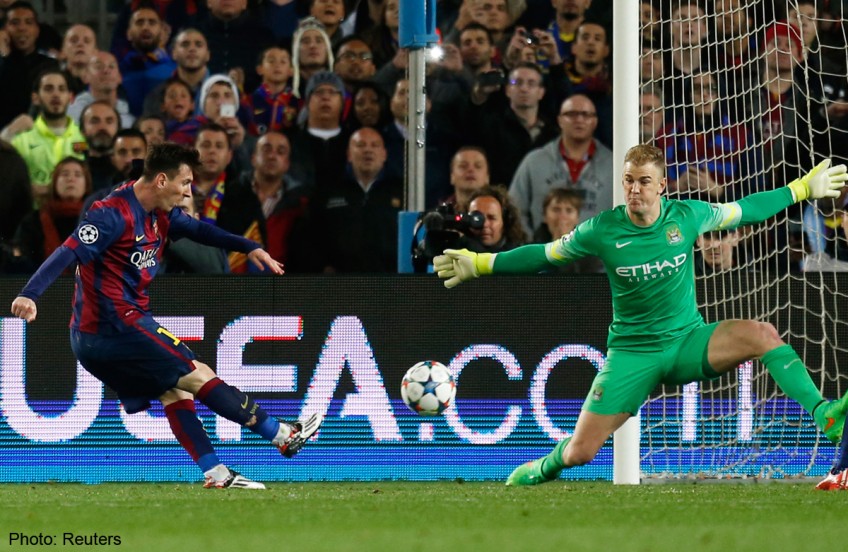 BARCELONA - Lionel Messi was in the unusual position of having to laud one of his opponents for once as Joe Hart produced a sensational performance, albeit to no avail, as Barcelona eliminated Manchester City from the Champions League on Wednesday.

Hart made 10 saves on the night to restrict Barca to a 1-0 victory thanks to Ivan Rakitic's solitary strike on the half-hour mark which sealed a 3-1 aggregate triumph.

Messi teed up the Croatian with a wonderful assist, but his quest to move ahead of Cristiano Ronaldo as the all-time leading scorer in Champions League history was frustrated by the stunning form of the English international.

"Hart is a phenomenon," said the four-time World Player of the Year.

"He saved everything today. I think we did everything to deserve a lot more, we had a lot of clear chances but the keeper had a brilliant game.

"We can only congratulate him, but the important thing is we achieved our objective to get through."

Despite being held scoreless, Messi is widely regarded to be in one of the hottest streaks of his fantastic career as Barca have won 17 of their last 18 games to make a potential treble of La Liga, the Copa del Rey and the Champions League a realistic target.

"I have gone from being a disaster to being in the best form of my career in a very short time," Messi added ironically, referring to Barca's mini-crisis having lost to Real Sociedad at the start of the year.

"I am just enjoying the moment like the rest of the team for the football we are playing and the results we are getting."

Barca boss Luis Enrique repeated his belief that Messi is the greatest player of all time, and urged the club's fans not to take his habitual brilliance for granted.

"He is the best player in the world without any doubt," said Enrique.

"Of this time and even for me in the history of the game. It is obvious and we are enchanted to have him among us.

"We have the luck to have Lionel Messi and shouldn't take for granted having a player of his class. It is a great pleasure and joy for all Barca fans to have him."

City manager Manuel Pellegrini, meanwhile, said the presence of Messi gave Barca an advantage over the remaining sides in Friday's draw for the last eight.

"Barca always have the added bonus of having Messi," he said when asked to compare the Catalans with competition favourites Bayern Munich, who City faced in the group stages.

The English champions also played Bayern before being eliminated at the last 16 stage last season and Pellegrini said City's tough draws over the past two seasons means their inability to reach the quarter-finals for the first time in the club's history cannot be considered a failure.

"I don't think it is a failure. It is disappointing," said the Chilean.

"Two years a row we have qualified for the last 16, which we didn't in the previous years. Maybe if we had faced someone other than Barcelona we would be in the quarter-finals."