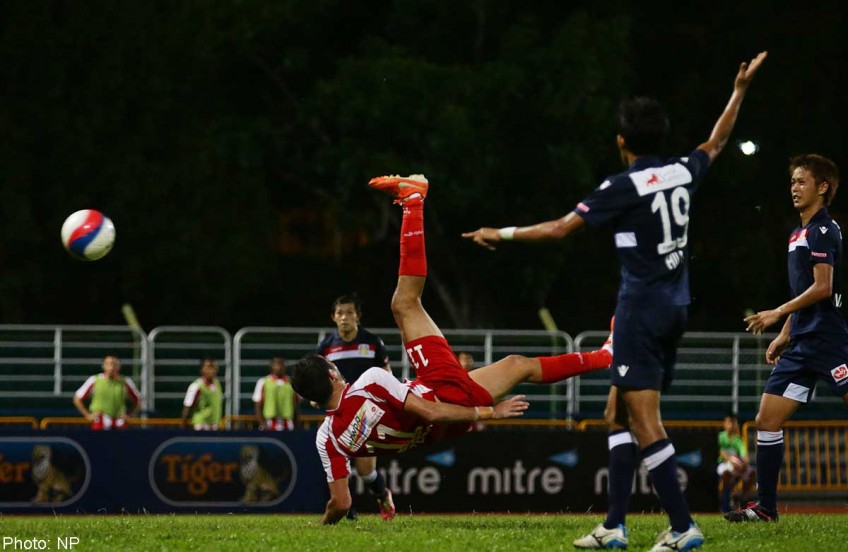 The one that got away: Tanjong Pagar’s Monsef Zerka attempting an overhead kick during the match against Hougang.

Staying up into the early morning to watch the 2014 World Cup in Brazil paid off for Tanjong Pagar goalkeeper Aurelien Herisson.

The 22-year-old (inset) emerged the hero at the Queenstown Stadium last night, as the Jaguars advanced to the StarHub League Cup final after beating Hougang United 4-2 in a penalty shoot-out.

Taking a page from the playbook of Germany custodian, Manuel Neuer, Herisson displayed good reflexes to save two spot-kicks in the shoot-out - from Fazli Jaffar and Fairoz Hassan.

"Yes, watching Neuer at the World Cup was inspiring," said the French goalkeeper, after the match.

"How did I save the penalties? It was instinct, and also information from my teammates.

"They told me which (Hougang) player would shoot where, and that helped."

The Brazilian-born Herisson, who is into his second season with the Jaguars, was just as stellar during the game, keeping his team alive with some top saves.

Though the Jaguars edged out the Cheetahs in possession, Hougang created a few chances, and could have taken the lead five minutes before half time.

Striker Geison Moura was quick off the blocks from the halfway line and would have scored if not for Herrison, who rushed off his line to narrow the angle and block the shot.

He was beaten once, in the 68th minute, when Hougang defender Igor Ferreira attempted an overhead kick in the box. But the post came to Herisson's rescue.

Powerful DPMM have been long-time leaders of the Great Eastern Yeo's S.League and are going for a double, and when told of his opponents in the final, an exasperated Jaguars coach Patrick Vallee said: "Ah, I was hoping (to meet) Geylang."

The Frenchman quickly insisted he did not mean to disparage the Eagles, saying: "I wanted Geylang coach Jorg (Steinbrunner) to get to the final. He is my good friend, and he (would have) deserved it after all he's done at Geylang.

"Nothing against DPMM. It's good that we face them because they are the best in the S.League.

"If we beat them in the final, it would be really special."

Tanjong Pagar have now played two 120-minute matches in four days - after their 1-0 extra-time win over the Warriors in the quarter-final.

The Jaguars, at least, will have utility man Ahmad Latiff back from suspension for the final.