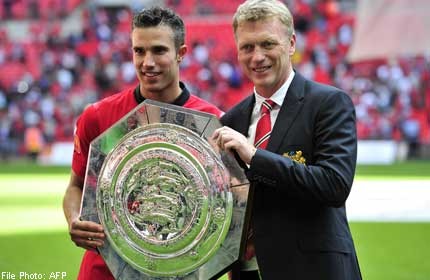 Van Persie scored in each half at Wembley on Sunday to earn United a 2-0 win in the annual season curtain-raiser, as the English champions secured their fifth Community Shield success in seven years.

The former Arsenal striker broke the deadlock with a fine sixth-minute header from Patrice Evra's cross before doubling his tally shortly before the hour with a deflected shot.

It sets him up for a tilt at matching or exceeding his haul of 30 goals from his debut United campaign, but Moyes does not want the team to become too dependent on a player who turned 30 last Tuesday.

"It was a great header; 16 yards on the angle into the corner. He might not be renowned for that type of goal, but it was a brilliantly guided header from a long way out," Moyes said of Van Persie's opener.

"I've been really impressed with Robin because he's been easy to work with. He's taken on everything. He's been really receptive, he's been helpful. We tried to manage him at the right times by playing him for some minutes and not (for others).

"He's so important, we have to look after him and we will do at the right times. It just showed you today, he came up with the goods again with his goals."

Moyes added: "We have to be aware how often we can use him and I'll try and make sure I do that to the best of my ability. We've got other centre forwards. Wayne (Rooney) wasn't fit, Chicharito (Javier Hernandez) has an injury, so we're just a little bit short at the moment."

Moyes also paid tribute to 20-year-old new signing Wilfried Zaha, who produced an enterprising display on his competitive debut before being withdrawn in the 61st minute after sustaining a knock.

"He's done well in the pre-season games and we thought it was right that he got the opportunity today," said Moyes.

"He's going to develop. There will be bits where he's up and down, but it was a great opportunity for him today to get on the pitch and be a part of Manchester United.

"We're looking forward to working with him and improving him."

Moyes also revealed that right-back Rafael, who was replaced by Chris Smalling after only 16 minutes, had sustained "a little bit of a hamstring injury", but did not provide further details.

United's victory gave Moyes the first silverware of his Old Trafford career and his opposite number, Wigan's Owen Coyle, predicted that the former Everton coach would prove a fitting successor to Alex Ferguson.

"I've no doubts David Moyes will be very successful. I'm a bit biased because he's a pal of mine, but there's no doubt he will take Manchester United from strength to strength," Coyle said of his fellow Scot.

"He's replaced the best manager we've ever seen in club football, but he was the right person for the job, no doubt about it. It's great for up and coming British managers to see a club like Manchester United going with David Moyes, because he has earned that right."

Wigan's shock success over Manchester City in last season's FA Cup final gave them a berth in the Europa League, but with promotion from the Championship the ultimate ambition, Coyle admits he will have to juggle his priorities.

"For Wigan it is an opportunity to play against very good sides," he said. "It is getting the balance right. Any game we enter we want to win, so we'll do our best when that competition comes about."