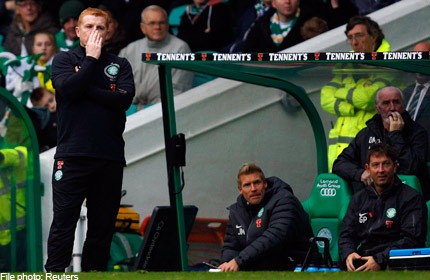 ASTANA, Kazakhstan - Celtic manager Neil Lennon says his side's Champions League hopes are far from over after they suffered a shock 2-0 defeat to Kazakh minnows Shakhter Karagandy in the first leg of their play-off match.

The Scottish champions dominated possession in the Astana Arena with Kris Commons hitting the woodwork and James Forrest seeing his effort clawed off the line by 'keeper Alexsandr Mokin as the Hoops came close to a crucial away goal.

But they struggled to contain Shakhter's counter-attacking style and went behind to a 12th minute Andrei Fionchenko strike before Sergei Khizhnichenko doubled their lead in the 76th minute when he headed past Fraser Forster from close range.

The defeat leaves Celtic, who reached the last 16 of the competition last season, with a lot of work to do in next Wednesday's return leg in Glasgow and puts Shakhter in the driving seat to become the first Kazakhstan side to reach the group stages of the Champions League.

However, Lennon was bullish about his side's chances and says he saw enough in their performance to know they have a great chance to turn things around at Celtic Park.

"It was a disappointing result, but we should have scored and then that would have put a different complexion on the tie," he said.

"However, it's not over yet. We have to go back to Celtic Park and there was plenty there for me to chew on in terms of chances.

"Shakhter didn't surprise us with the way they played. We knew they would throw balls forward and we should have dealt with the first goal a lot better and the second goal they had a bit of luck with.

"I didn't really feel uncomfortable in the game at all. I thought we would score and that would put a totally different complexion on the tie, but the fact that we didn't just makes it that little bit more difficult now.

"I don't know how many chances we had tonight - clear cut ones as well - and if you don't take your chances then you make life difficult for yourself. "But we're not down and out just yet."

But Lennon was reluctant to blame their loss as a contributing factor to his side's performance in Kazakhstan and warned his current crop of stars that he wanted to see an instant improvement.

"There were a few players who will be disappointed with their performances and they better get better very quickly," added Lennon.

"I think I've still got enough in the squad to come through the tie, so that's what we'll endeavour to do."