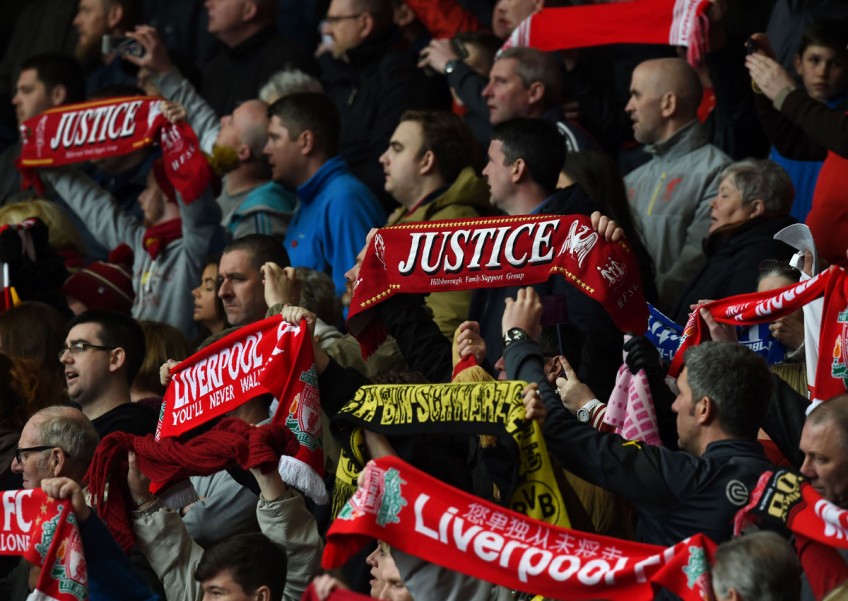 Fans hold football scarves during a memorial service at Anfield in Liverpool, north west Engand on April 15, 2016, on the 27th anniversary of the Hillsborough Disaster.
AFP

Thousands of sympathisers were expected to pay an emotional tribute to the Hillsborough disaster victims on Wednesday after a landmark inquest found that 96 Liverpool football fans were unlawfully killed.

The day after the biggest inquest in English legal history determined police blunders caused the fatal 1989 stadium crush, the city of Liverpool was due to come together to reflect on the relatives' arduous 27-year campaign for justice.

The two-year inquest delivered the answer families waited a quarter-century to hear after an original inquest, since quashed in the light of fresh evidence, recorded a verdict of accidental death.

Wednesday's event will also be a chance to consider where the families' struggle goes next, with some campaigners insisting prosecutions must now follow over Britain's worst stadium disaster.

The commemoration outside St. George's Hall in Liverpool, northwest England, in the presence of the victims' families, will be filled with music, speeches and moments of reflection.

The names and ages of the dead were to be displayed on big screens. Some 38 of the victims were between 10 and 19.

The event will conclude with a choir leading the throng through the Liverpool Football Club anthem "You'll Never Walk Alone".

The commemoration "is an opportunity for the city to come together with the families and campaigners and show the world the overwhelming spirit of comradeship and solidarity that exists in this city towards them", said Liverpool Mayor Joe Anderson, who will lead the event.

"So many people have been touched by their struggle over nearly three decades.

"They are an example to everyone who seeks out truth and justice." Families of the deceased voiced their relief that the jury exonerated Liverpool fans from blame, after examining all the evidence.

The inquests heard testimony that the local police force had decided to blame drunken, ticketless Liverpool fans for the disaster.

Such claims were published in several newspapers at the time.

But the behaviour of Liverpool fans was found in no way to have contributed to the crush outside the ground which led to police opening the gates to alleviate it.

Jurors were asked: "Was there any behaviour on the part of football supporters which may have caused or contributed to the dangerous situation at the Leppings Lane turnstiles?" They answered with a simple "no".

Home Secretary Theresa May, the interior minister, was to set out the government's full response to the inquest's findings in parliament on Wednesday.

English inquests only establish how the deceased came by their deaths.

Now there is set to be a particular focus on the role of David Duckenfield, the senior officer in charge of policing Hillsborough on the day of the disaster.

It was Duckenfield who ordered the opening of an exit gate. That enabled 2,000 fans to surge into the already over-full terracing pens behind one of the goals, causing a fatal crush.

Duckenfield, now 71 and retired, admitted at the inquest he told a "terrible lie" in the immediate aftermath of the match by claiming that fans had stormed the gate.

Following Wednesday's mass event and media analysis of the inquest's outcome, attention is likely to shift towards two huge criminal investigations into the disaster, which should conclude by the end of the year.

A police probe is looking at the lead-up to the tragedy and the day of the match itself.

A separate inquiry, the biggest in the police watchdog's history, is looking at the alleged cover-up attempt afterwards.

That probe has seized 7,000 exhibits including 167 floppy disks which required investigators to buy a 1980s computer.

Some police officers' pocketbooks were recovered from lofts and garden sheds. Some were covered in rodent droppings.

The police watchdog says it is considering 260 police accounts which appeared to have been amended in some way.

Any decision on charges afterwards could take prosecutors three to six months once the investigations conclude.