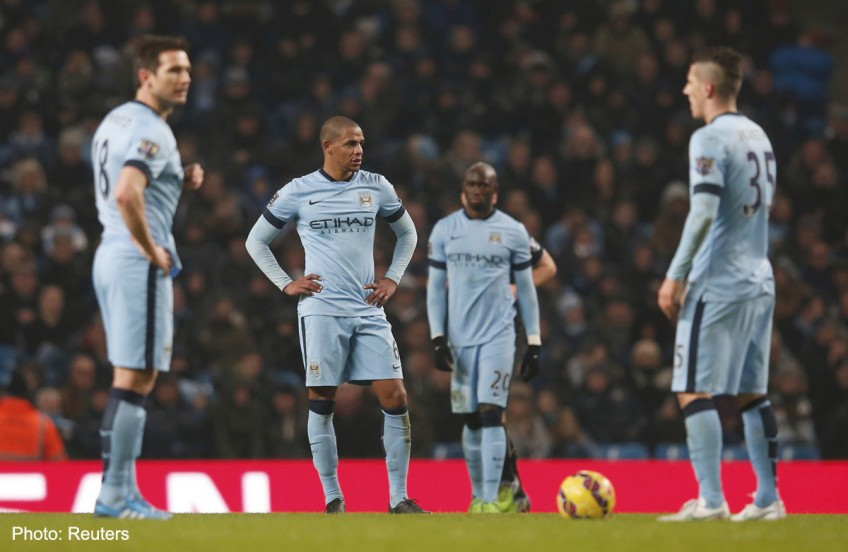 LONDON - The absence of Vincent Kompany, Yaya Toure and Sergio Aguero cost Manchester City dear as they blew a two-goal lead to draw 2-2 at home to struggling Burnley on Sunday.

The Premier League champions looked certain to cut the gap on leaders Chelsea to one point with a 10th successive win in all competitions when they surged ahead through David Silva and Fernandinho but they wilted in the second half.

City have been winning games without injured forwards Aguero, Edin Dzeko and Stevan Jovetic but the loss of midfield dynamo Toure proved too much to cope with just 48 hours after beating West Bromwich Albion.

"Maybe winning 2-0 we thought the game was over but until the last whistle the game is never finished," manager Manuel Pellegrini told reporters. "It is clear we couldn't keep the same intensity in the second half."

Silva and Fernandinho put City on course for a comfortable win over struggling Burnley but George Boyd pulled one back just after halftime and Ashley Barnes struck a late equaliser for the visitors. "The first goal was very important for them because they improved a lot and had a lot of trust," Pellegrini said.

City powered into an early 3-0 lead against West Brom before easing off on the way to a 3-1 win in poor weather conditions.

"It is difficult for all the teams - especially our team because we played on a very heavy pitch against West Bromwich in the last game - to keep the same pace in the second half," Pellegrini said.

"We played well in the first half, we were 2-0 up but in the second minute of the second half Burnley score a clear offside goal," he said. "After that they scored their second from a rebound. But I am not saying we are unfortunate. I am saying, in football, just two balls can decide the score."

The Chilean remained optimistic about retaining the title at the halfway point of the season. "Of course after you are winning 2-0, it is more disappointing to lose those two points but we have all the second round to see who will be the best team," he said.