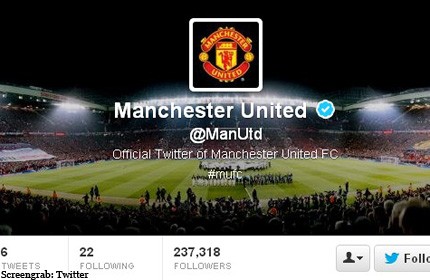 United's move into micro-blogging platforms is part of their already hugely successful marketing campaign, which has established the club as one of the world's biggest sports brands.

It will initially launch in English, with foreign-language versions to follow.

United are also determined to consolidate their strong position in the Asian market and their www.weibo.com/manchesterunited page gives them a presence on one of the most popular sites in China, a hybrid of Twitter and Facebook populated by well over 30 per cent of Internet users in the region.

United already has an impressive online presence with 67 million page views on its website during the final month of the 2012-13 season and over 34 million likes on its Facebook page.

Richard Arnold, United's group managing director, said: "Connecting with our fans is a key part of the club's strategy. We have invested a lot of time and resource into providing the best media offering for its fans, which is evident from the recent MUTV acquisition and today's Twitter and Sina Weibo launches.

"Every month there are over five million Manchester United related social media posts and the level of engagement we have with our fans via social media is amongst the highest of all top global brands.

"I look forward to these new ventures further extending the club's interaction with its fans around the world."