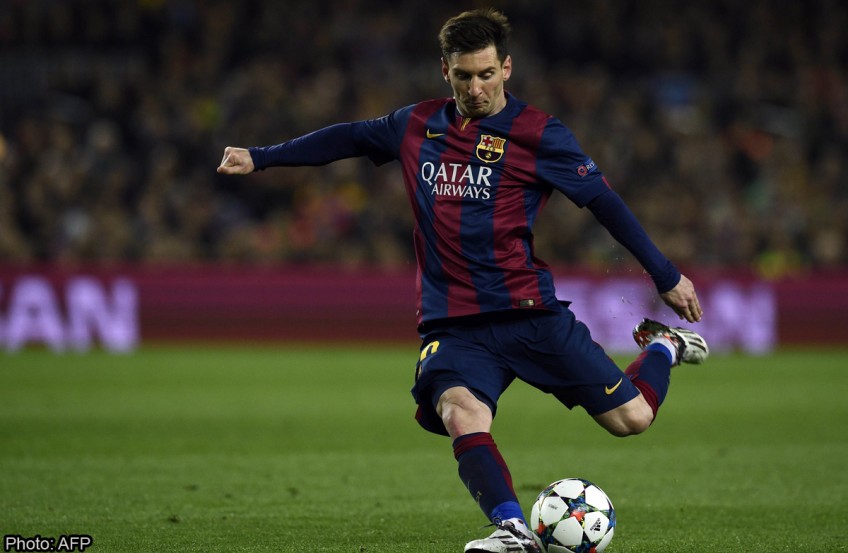 CANNING MADRID - Four-time World Player of the Year Lionel Messi has warned his team-mates not to take Real Madrid lightly, despite their contrasting form ahead of Sunday's crucial La Liga clash at the Camp Nou.

Barca go into the game still on course to win the treble for just the second time in the club's history after a 17th win in 18 games over Manchester City on Wednesday secured their place in the last eight of the Champions League for the eighth consecutive season.

By contrast, Madrid have lost five of their 16 games in 2015 so far with some of the Los Blancos faithful rounding on star players Cristiano Ronaldo and Gareth Bale, as well as coach Carlo Ancelotti.

"We have a lot of respect for them. When Madrid are like this is when they are at their most dangerous," said Messi, whose brilliant form has been the catalyst for Barca's rise in recent months.

Messi has struck 20 times in his last 17 games to usurp Ronaldo as La Liga's top scorer this season by two goals.

"They have a great team full of brilliant individuals," added Messi.

"We will try to face the game like we do every match, to play our game and win." Madrid's slip-ups in recent weeks mean the European champions now trail Barca by a point with just 11 games to play.

And Andres Iniesta knows that victory for the hosts on Sunday would be a huge step towards a fifth La Liga title in seven years for the Catalans.

"We have prepared for Clasicos in every way in the past. They are one-off matches no matter how the teams come into the game. I don't think Madrid are in bad shape," said the Spanish international.

"We have to play well and be at our best. There isn't a long time until the game and all the small details count. If we do things right on Sunday then it could be a great day."

Sergio Busquets isn't expected to recover from an ankle injury in time to make his return, so Luis Enrique is expected to make just one change from the side that started against City with Claudio Bravo replacing Marc-Andre ter Stegen in goal.

Madrid boss Ancelotti all but admitted his starting line-up had been decided for him by the promising returns from injury made by Luka Modric and Sergio Ramos in last weekend's 2-0 win over Levante.

"I think it is quite clear for everyone," said the Italian.

"There won't be any surprises." Modric will be reunited with Toni Kroos and Isco in midfield with James Rodriguez now the only significant injury absentee.

Meanwhile, Bale's first two goals in nine outings will ensure his place up front alongside Ronaldo and Karim Benzema.

Before the ball is kicked at the Camp Nou, though, Valencia could force their way into an unexpected three-way fight for the title with victory at Elche on Friday night.

Nuno Espirito Santo's men have dropped just two points in their last six games and would move to within five of Barcelona with another win.

Atletico Madrid are just a further point adrift of Valencia and will need to shake off the fatigue and knocks accumulated in their tense progression to the Champions League quarter-finals on penalties over Bayer Leverkusen in midweek to stay in contention for a top four finish.

Miguel Angel Moya, Raul Garcia and Mario Mandzukic all picked up injuries that will keep them out for the visit of Getafe to the Vicente Calderon on Saturday.