Football: Mourinho still has Rooney in his sights 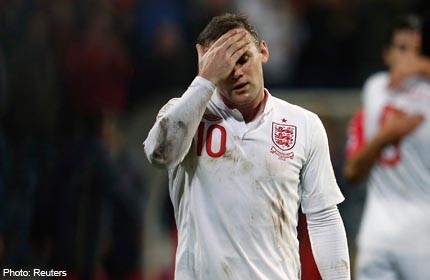 COBHAM, United Kingdom - Jose Mourinho insisted on Friday he will not give up on his pursuit of Wayne Rooney until the transfer window finally closes.

The Chelsea manager has made it clear he wants to recruit Rooney this pre-season but has so far failed twice to persuade Manchester United to part with the England striker.

And while Mourinho avoided referring specifically to his ongoing pursuit of Rooney during a news conference at Chelsea's Cobham training ground, south of London, on Friday he confirmed ahead of his side's opening Premier League game with Hull City he will not abandon his efforts to land his number one target.

Portuguese icon Mourinho has also been linked with a reunion with Samuel Eto'o who appears destined to leave Anzhi Makhachkala and has spoken positively about his desire to work with his former Inter Milan coach again.

"For me as a manager, I'm happy that a player who worked with me before goes publicly and says he'd like to join me again," said Mourinho, now in his second spell in charge of Chelsea.

"Especially a player like Samuel, a player with a big history in European football.

"But we are trying to get one player (Rooney) and we'll see what happens. Before the transfer window closes, we'll make decisions. The decisions can be different decisions." He added: "I'm just a Chelsea manager, and every one of us is looking always to try and strengthen your squad.

"We (managers) all say 'no' but we lie to the last day, when the market is open, because we're all waiting for something to happen.

"Even if we say we're very happy with our squad, we lie, because we always want to make it better.

"We'll see what happens, not just with us but with Manchester United.

"I like my squad. I'm not lying there. And I enjoy working with these young people, some of whom are taking their first steps in the Premier League, and I'm enjoying the process of working with this young team." While Mourinho expects to add to his squad, he was adamant David Luiz will not be leaving west London side Chelsea despite interest from Barcelona.

"This club did fantastic work and found a fantastic balance," explained Mourinho. "The club is in a perfect condition to say 'we don't want to sell this player or that player. We want to keep this one.' "David is one of the players the club made a huge investment in.

"He's not been here for seven-to-ten years. He's been here for a couple of years, and he signed a new contract last year and was happy to do it.

"So we want to keep him and we understand that a big club like Barcelona wants the best, and tries to get one of the best central defenders in the world.

"But we are being very honest also by saying there is no chance David Luiz is leaving."