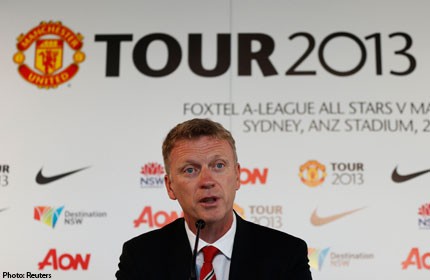 SYDNEY, New South Wales - Manchester United boss David Moyes said Sunday he still needs to come to terms with the level of scrutiny he faces as manager of one of the world's biggest football clubs.

The Scot, who has been in the high-profile job for just two weeks after replacing Sir Alex Ferguson, on Saturday lost his first match with his new side 1-0 against the Thai All Stars in Bangkok.

Moyes, 50, said the pressure of managing at Old Trafford did not compare with his decade in charge at English Premier League rivals Everton.

"I have to put this in perspective and it is completely different," Moyes told reporters at a press conference after touching down in Australia.

"The amount of support we've had, the amount of interest we've had from you people (media) ... constantly we are watched and scrutinised and it's something I'll need to come to terms with."

Moyes was speaking ahead of next weekend's sold-out pre-season tour match against the Australian A-League All Stars in Sydney.

"The previous manager, Sir Alex, told me what to expect. He told me especially what the tours were going to be like and I think if you have a football club like Manchester United, you have to make sure you go to your supporters worldwide," Moyes said.

"I'm following probably the finest football manager that's ever lived," he said of Ferguson, who won a string of honours including 13 Premier League titles.

"I'm always saying if I can even win a quarter of what he won, I'll have done very well.

"But the first thing I've got to do is settle into the job, get to know everybody and find my way around."

United stalwart Ryan Giggs, who made his debut for the club in 1991, said it felt strange working under a new manager, but out on the pitch it wasn't on players' minds.

"I've really enjoyed it. Just like any other pre-season, you've got to work hard, knuckle down and prepare yourself as best you can for the first (EPL) game of the season against Swansea (on August 17)."

Moyes said he expected the A-League All Stars to prove a stiff test, adding that the trip to Asia and Australia was an important part of his squad's pre-season.

"It's a big part of our preparations coming here. We're actually looking forward to a good week's training," Moyes said.

"The way the tour works out, this is our longest stay, so we'll use your fine facilities to try and pick up the training a little bit and get prepared."

Moyes confirmed star striker Robin van Persie would link up with the squad in Sydney. Wayne Rooney and captain Nemanja Vidic are out injured.

Moyes did not comment on unsettled Rooney's future, saying the England international would be out of action for two to three weeks with a hamstring injury.