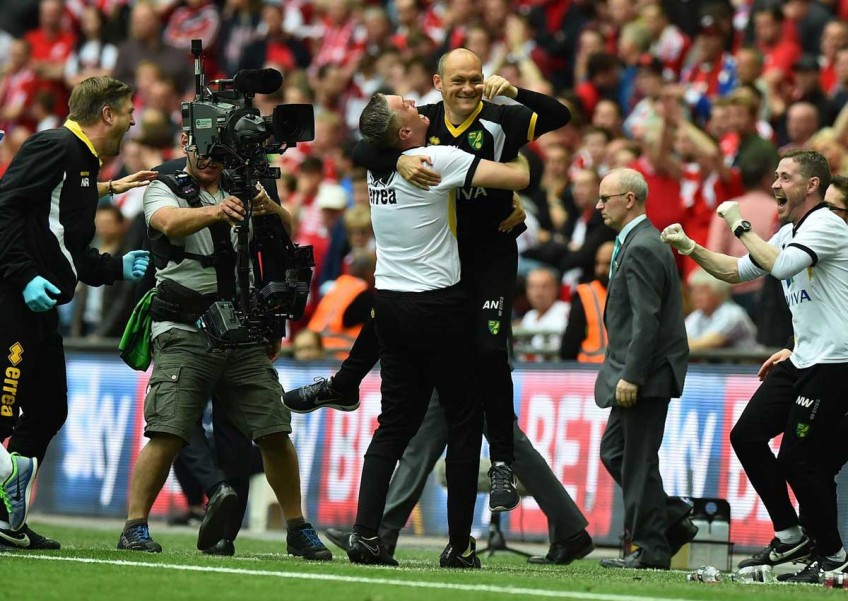 Norwich City's Scottish manager Alex Neil celebrates with his staff after his team beat Middlesbrough 2-0 in the English Championship playoff final to earn promotion to the Premier League.
AFP

LONDON - Just seven years after coming within hours of going out of business, Bournemouth will complete a remarkable rags-to-riches rise when they kick off their first Premier League campaign this weekend.

For decades, genteel Bournemouth was known primarily as one of the most popular retirement spots on England's south coast and the lethargic efforts of the local football team were in keeping with that sedentary image.

The malaise was so profound that Bournemouth came close to going into liquidation on three occasions in 2008 as the club languished in obscurity near the bottom of English football's fourth tier.

But like the area itself, whose tourist board now boasts of "a vibrant, cosmopolitan town with a buzzing nightlife", Bournemouth underwent a face-lift thanks to the inspired management of Eddie Howe and the subsequent investment of Russian benefactor Maxim Demin, whose petrochemical fortune has bankrolled the club since 2011.

With a stadium seating only 11,700, the Cherries are by far the smallest team in the top tier, making Aston Villa's arrival on Saturday for the first top-flight fixture in the club's 116-year history all the more extraordinary.

However, the highly regarded Howe, who secured Bournemouth's promotion to the second tier in 2013 and then led them into the Premier League as surprise Championship winners in May, has no intention of resting on his laurels and has spent the close season analysing how clubs of similar stature have fared in their first seasons.

That research showed the 37-year-old that Barnsley, Blackpool and Swindon Town, all relegated after one season, reached the Premier League playing an attacking style that was brutally exposed against higher quality opposition.

With that in mind, Howe has been trying to follow the example set by Swansea City, whose swashbuckling promotion in 2011 was followed by a subtle switch to more cautious tactics and careful transfer dealings that have allowed the club to punch above their weight.

"We have analysed a lot of the clubs that have got promoted and what they have done and how they have gone about their work," Howe said.

"I would say we are more related to Swansea than anyone else with the style of our football. There are similarities between the two clubs, especially with their history and ours. And hopefully we can emulate what they have done." While Bournemouth's progress has delighted football romantics, Watford's return to the top flight for the first time since 2007 has had a savvier edge to it.

In an era when overseas investors are desperate to buy English clubs so as to cash in on the Premier League's lucrative television deals, Watford have benefited from their takeover by the Pozzo family.

The astute Italians had already shown with Udinese in Italy and Granada in Spain that they have a successful blueprint for turning unglamourous teams into top-tier mainstays and Watford are the latest club to reap the rewards.

Watford's success was not without casualties, however, as the Pozzos went through four managers last term, then parted company with Slavisa Jokanovic in the close season to make way for former Valencia and Atletico Madrid coach Quique Sanchez Flores.

"It is special to come into the Premier League, I know that. I feel a passion for my work and I want that to transmit to the fans and players," Flores said when asked how he would avoid the same fate as his predecessors.

Preparing to embark on their eighth Premier League season after going up via the play-offs, Norwich City are the most familiar of the three promoted clubs.

Their Scottish manager Alex Neil will be a name to follow, the fiery 34-year-old having earned comparisons with Manchester United legend Alex Ferguson.

Neil made his name north of the border with Hamilton Academical before leading Norwich into the Premier League just five months after taking charge.