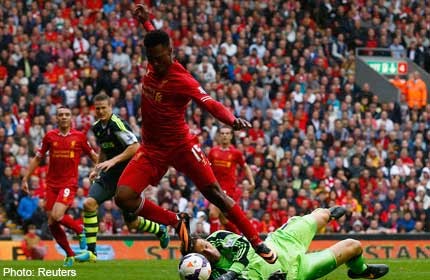 LONDON - Simon Mignolet saved a last-gasp penalty to earn Liverpool a 1-0 win over Stoke City on the opening day of the new English Premier League season at Anfield on Saturday.

The game, the first domestic league match in the world to be played with goal-line technology in place, was ultimately decided by a low 20-metre strike from Daniel Sturridge in the 37th minute.

Sturridge had the honour of scoring the first goal of the new season.

The England striker drilled a crisp, low shot past Stoke goalkeeper Asmir Begovic from just outside the penalty area.