Football: The next big wave 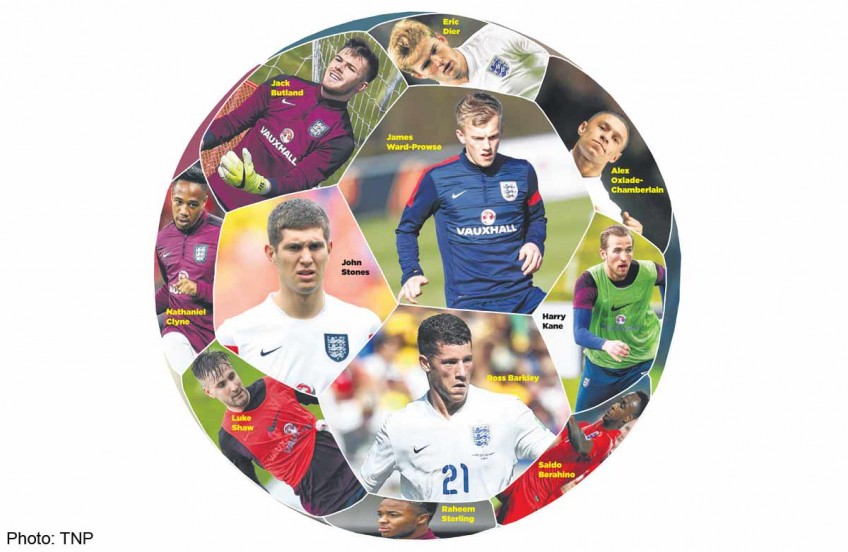 David Beckham and gang were tipped to be a force at Euro 2004, and hit their peak at the 2006 World Cup.

But they flopped on both counts.

With the international retirement of Steven Gerrard and Frank Lampard, the curtain fell on a group of Englishmen who were supposed to return the nation to football's mountain-top.

Today, experts worry that the lack of playing opportunities for young English footballers in the Premier League will keep the national team in the doldrums.

A recent BBC survey showed that English players accounted for just 32.26 per cent of playing time last season. In 1994, it was 69 per cent.

Is the future of the Three Lions so bleak?

From out of nowhere, young Harry Kane has burst onto the scene to become Tottenham Hotspur's key player in their push for a top-four place.

Liverpool's Raheem Sterling is showing no signs of slowing down following his breakthrough season in the 2013/14 campaign.

At Everton, Ross Barkley is starting to prove that he could be England's most exciting midfield talent since Paul Gascoigne.

And there's also Arsenal's Jack Wilshere who turned 23 only two months ago.

Is this England's next Golden Generation?

Can they peak by the pan-continental Euro 2020 Finals, when Wembley will host the semi-finals and final? Or thrive at the 2022 World Cup Finals in Qatar?

The England Under-21 captain is unable to nail down a starting spot at his club because Asmir Begovic is the undisputed No. 1.

But during a five-week loan spell at Derby County this season, he impressed former Manchester United goalkeeping coach Eric Steele, who said: "He is going to be a great goalkeeper, you can see that. He has got everything going for him in terms of his build and stature."

Confident and reliable, Butland, who already has one senior cap, is widely seen as Joe Hart's successor.

Yet another product of the Saints' excellent youth set-up, Clyne has been one of the best defenders in the league this term.

Excellent going forward and reliable at the back, he made his senior England debut last November.

His impressive performances have put him on the radar of top clubs, Manchester United and Liverpool included.

In United's 3-1 win over Leicester at the end of last month, Shaw was one of the outstanding players.

He reads the game well and attacks just as fluidly as he defends.

The £30 million ($62.6m) United shelled out to make him the world's most expensive teenager last June is an indication of how highly he is rated.

So goes the adage; If you're good enough, you're old enough.

Elegant and poised, he is seen as a Rio Ferdinand in the making.

Another surprise package at Spurs, Dier has made remarkable progress in recent months.

Not only has he impressed his manager Mauricio Pochettino, he has even cemented a regular starting spot in the heart of the defence alongside Jan Vertonghen at White Hart Lane.

His strength is his biggest asset, although his versatility will definitely come in handy - he can also operate as a right back.

Another exciting talent from Southampton's conveyor belt of bright prospects, Ward-Prowse is known for his passing skills.

His brilliant crossing makes him an option on the right flank, but he can also operate in a Michael Carrick role because of his precise distribution and ability to keep possession.

A set-piece specialist, he netted a spectacular free-kick for the England Under-20s against Brazil to win the Goal of the Tournament at the 2014 Toulon tournament, where he was named one of the top three players.

Barkley is so good with either foot that he doesn't even know which side he prefers to have the ball at.

He drives at defences with speed and amazing trickery.

His Everton manager Roberto Martinez calls him a cross between Michael Ballack and Paul Gascoigne.

After a difficult start to the campaign, Sterling's improved performances towards the end of 2014 coincided with Liverpool's revival.

His maturity and confidence are rare for players his age, and the fact that he came through Liverpool's troubled spell with his reputation unscathed speaks volumes about his mental strength.

At Euro 2012, he became the second youngest player to play for England at a European Championship.

Able to work on both flanks and in the heart of midfield, the 21-year-old has an abundance of flair and dribbling ability.

When asked who he thought was his most-improved player in 2014, Arsenal manager Arsene Wenger mentioned Oxlade-Chamberlain first.

Kane is undoubtedly the breakout star of the EPL season.

Industrious and physical, he also possesses a subtle touch and superb finishing skills. His 19 league goals make him the joint-top scorer in the Premiership with Chelsea's Diego Costa.

He is expected to be given his senior England debut by manager Roy Hodgson when England host Lithuania on Saturday morning (Singapore time).

Playing for unfashionable West Brom hasn't stopped the Burundi-born striker from thriving in the Premiership.

His tally of 12 league goals this season puts him behind only Kane and Charlie Austin in the all-English goal-scorers' chart.

Blessed with pace and a wonderful finish, he is expected to join one of the Premiership heavyweights sooner rather than later.