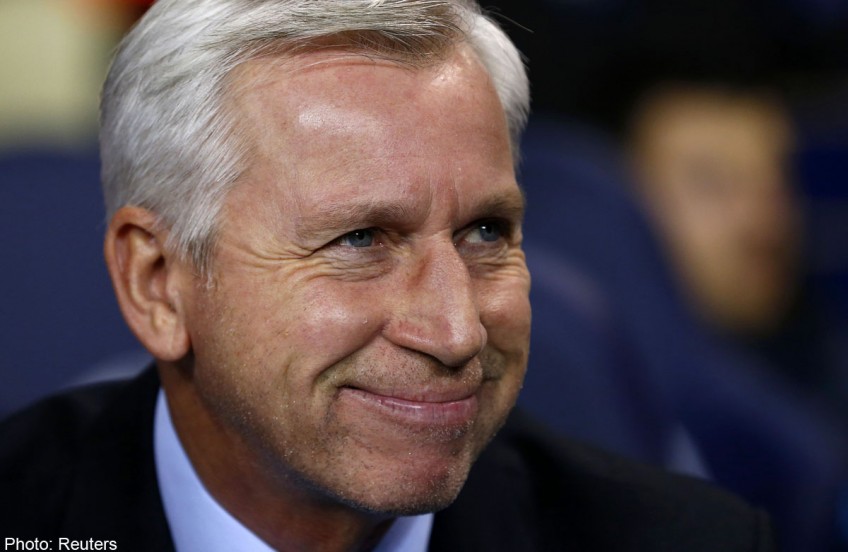 NEWCASTLE, United Kingdom - Newcastle manager Alan Pardew cast his future into doubt after failing to rule out a return to Crystal Palace.

The 53-year-old has been strongly linked with the vacant post at Selhurst Park following the sacking of Neil Warnock.

Pardew, a beaten FA Cup finalist with Palace as a player in 1990, has been installed as a clear favourite to succeed Warnock by many bookmakers.

The Newcastle manager turned down an opportunity to put an end to growing speculation, choosing not to conduct any press interviews after his side stemmed a four-game losing streak with a narrow 3-2 Premier League victory over Everton.

His assistant John Carver was prevented from answering questions about the future of Pardew, who recently celebrated four years in charge at St James' Park, and who is the second longest-serving manager in the Premier League after Arsenal's Arsene Wenger.

Pardew made more than 100 appearances for the Eagles during a four-year spell at Palace from 1987, and still retains property near their Surrey base. This is not the first time he has been linked with a return to his former club.

He has more than five years left on his current deal at St James' Park, having recently signed a contract extension to 2020.

However, he enjoys an uneasy relationship with Newcastle supporters, who mounted a campaign calling for his dismissal earlier this season before a six-game winning run helped to see him through one of his most turbulent spells in management.

His post-match no-show took the attention away from a much needed victory, as Everton manager Roberto Martinez insisted Papiss Cisse should have been sent off before cancelling out Arouna Kone's early goal for the visitors.

Seamus Coleman felt the full force of Cisse's elbow, a first-half incident that went unseen and unpunished by the officials. The Senegal forward is likely to face trial by video for the way he caught the Everton defender in the throat at a Newcastle set-piece.

"He's very fortunate he stayed on the pitch," insisted Martinez, in the wake of a fifth defeat in seven games for his mid-table side.

The Spaniard added: "It's unacceptable to see an action like that. It's a clear elbow to try to hurt someone.

"I don't want to see players sent off but that's unacceptable from Cisse. It shouldn't be allowed. He elbowed a fellow professional and that should have been a red card. There's no intention to hide it.

"He acts in a manner that's hard to justify, then he scores the equaliser and the game changes completely."

Carver pleaded ignorance of the incident. "All I saw was Seamus Coleman lying on the floor," he said. "I've not had chance to see the TV since but it's obviously been mentioned so we'll look at it."

Cisse swept home his ninth goal of the season and fifth in six games from close range after Mike Williamson pulled back a Cheick Tiote cross.

Ayoze Perez put Newcastle ahead after the break and Jack Colback doubled the advantage before Everton substitute Kevin Mirallas pulled one back late on.

"It's a concerning run," Martinez added. "We're not in a good moment and everything that could go against us went wrong. You don't want to create that negative momentum and we have to stop giving away soft goals."