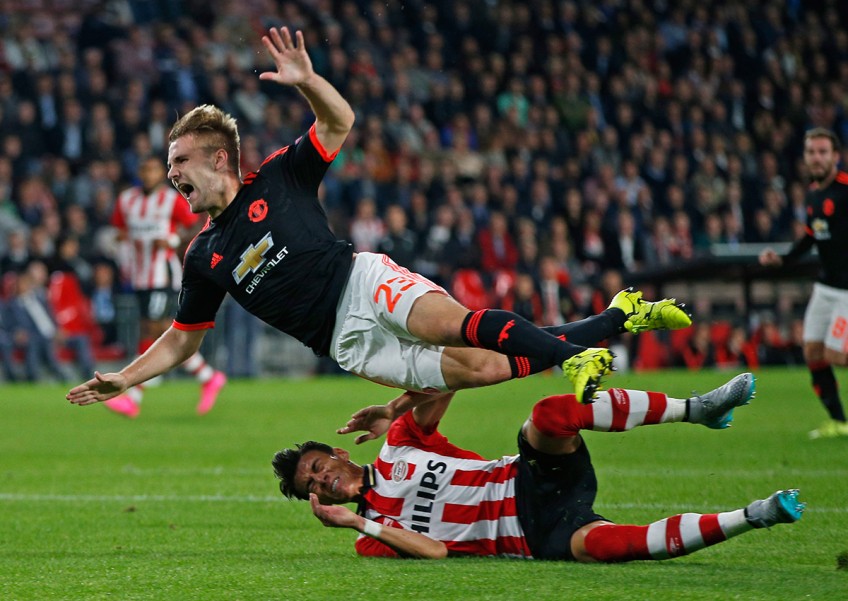 Moreno was accompanied on Friday by PSV coach Phillip Cocu at the hospital in Geldorp, where Shaw underwent surgery directly after being admitted.

"We first asked whether Shaw would meet us, which he wanted to," Cocu told Dutch media on Saturday. "We offered him the help of PSV should he need anything in relation to his recovery."

Cocu said the incident had weighed heavily on Mexican international Moreno, who suffered a broken leg of his own at last year's World Cup in Brazil. "It has affected him, it has affected the others and it has affected me," Cocu told reporters. "Hector is really distressed his opponent was so badly hurt."

Cocu also defended his player, saying he had no intention of injuring the Manchester United man. Moreno issued an apology the day after the game.

Shaw, 20, was injured under a challenge from Moreno as he stormed into the penalty area in the 15th minute of PSV's 2-1 win in their Group B opener.

The game was stopped for eight minutes while medical staff attended to the England international, who was then carried off on a stretcher with an oxygen mask strapped to his face.

On Friday, Manchester United manager Louis van Gaal said he took heart from Shaw's positive attitude. "Amazing for me. Big surprise," said Van Gaal. "It is not easy but his family is there. We have sent people to him. There is still a long way to go."