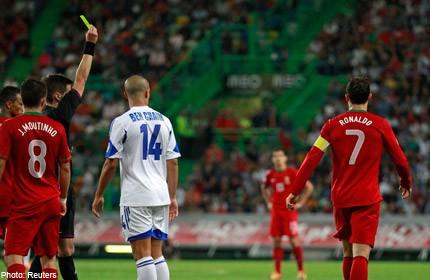 LISBON - Cristiano Ronaldo criticised Portugal's display in the 1-1 draw with Israel and was tight-lipped on claims he deliberately got himself booked to ensure his availability for next month's World Cup qualifying playoffs.

The Real Madrid forward will miss the last qualifier at home to rock bottom Luxembourg on Tuesday through suspension after receiving a yellow card for protesting in the dying minutes against Israel on Friday.

Real Madrid team mate Pepe is also banned for a match where there seems little to play for because Russia and Portugal are certain to finish in the top two in Group F.

Russia, who are three points ahead of Portugal, travel to fourth-placed Azerbaijan on Tuesday.

"I can't talk about that (booking)," Ronaldo told reporters. "FIFA is always very attentive to those situations," he added, referring to football's ruling body.

"The playoff is the most important and I don't want to be out. I will be at those two matches."

"We have to improve in many aspects," he said. "Israel had two buses behind the ball and when it's like that it's hard to score.

"We were apathetic in the second half, looked sleepy even, and things did not go well. We lacked a bit of maturity at times, maybe it was because we had a young team with a lot of changes."

Of all the teams Portugal could meet in the playoffs, Ronaldo said France were the side he feared the most.

"France are the strongest we may face," he explained. "They are the only ones I do not want to face."

Portugal have called up teenage Galatasaray forward Bruma and Inter Milan centre back Rolando to replace Ronaldo and Pepe against Luxembourg.