Football: Singapore to host ICC and top football clubs until 2020 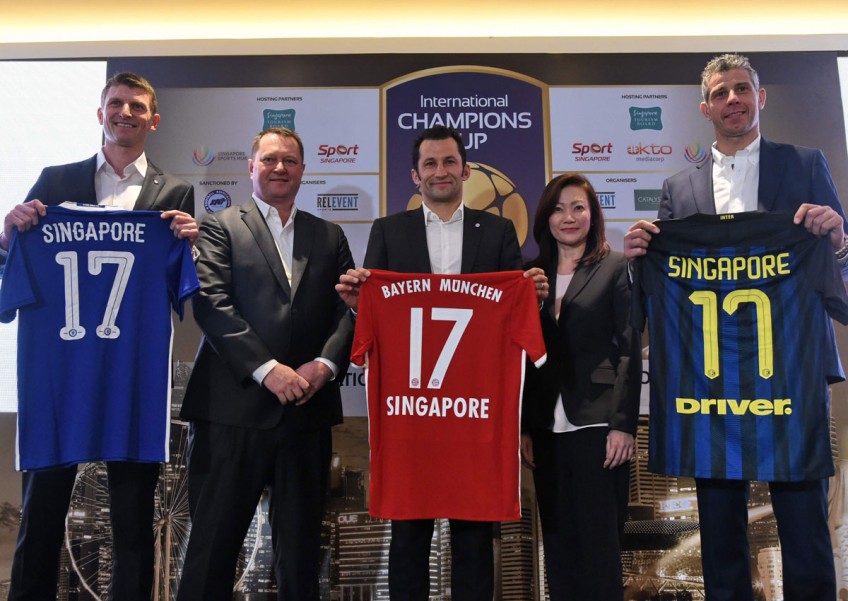 THE worst-kept secret in Singapore's sports scene was finally made official on Thursday, as it was confirmed that the Lion City will indeed host the elite International Champions Cup (ICC) football tournament this July.

What wasn't quite expected, however, was the surprise announcement that Singapore will stage four consecutive editions of this high-profile event at the Sports Hub, from this year to 2020.

The first edition, to be played at the 55,000-seater National Stadium from July 25 to 29, will feature three of Europe's most established clubs - five-time English league champions Chelsea, German heavyweights Bayern Munich and traditional Italian powerhouse Inter-Milan - in action in a round-robin format.

Rumours have swirled around for weeks that these three teams would be in town to play against one another in July, just before the start of the 2017/18 season.

At a press conference held at the Mandarin Oriental Hotel on Thursday, the Singapore Tourism Board (STB) and ICC founder Relevent Sports and Catalyst Media Group announced a four-year deal to make the Republic the exclusive host city in South-east Asia.

The deal also makes Singapore only the second country in Asia to host the annual pre-season tournament, the other being China.

STB deputy chief executive Melissa Ow described it as an "exciting moment" for Singapore to be a proud host of a world-class football tournament.

"More than any other sport, football commands a huge, avid, and some would say, fanatical, following. This is no different in Singapore and South-east Asia.

"With the promise of football action of the highest calibre played by the best clubs in the world, we're sure the ICC will thrill and delight local and foreign fans," she said.

She noted that the ICC has a worldwide broadcast audience of some 70 million viewers, and this reach will "undoubtedly burnish Singapore's international profile as a sports tourism hub".

Patrick Murphy, the chairman and president of Catalyst Media Group, said the organisers had intended to stage an ICC event in the ASEAN region, and that Singapore had emerged as a frontrunner for many reasons.

"I think Singapore is an ideal place for this because it's got an incredible infrastructure to bring tourism and fans around the region, so we are going to be expecting a lot of visitors."

He added that the plan is to bring in different teams for the subsequent editions of the tournament, which could mean that fans might get the chance to see the likes of other big-name clubs such as Manchester United, Real Madrid and Barcelona.

Bayern Munich will play the opening game of the ICC in Singapore against current English Premier League leaders Chelsea on July 25 in a mouth-watering rematch of the 2012 UEFA Champions League final.

The German club will then square off against Inter-Milan two days later, before the tournament wraps up with a battle between Chelsea and Inter-Milan on July 29.

The entire tournament will be broadcast 'live' on Mediacorp's okto channel. More details on the tournament can be found at internationalchampionscup.com.