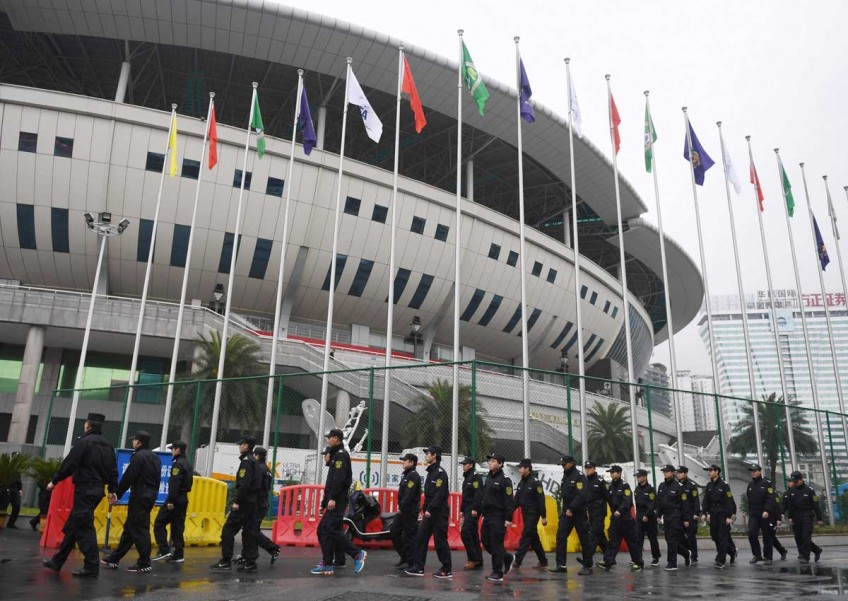 Security guards march outside the Helong stadium, the venue for a World Cup football qualifying match between China and South Korea, in Changsha, in China's central Hunan province on March 22, 2017.
AFP

Changsha, China - Chinese authorities have stepped up security for Thursday's tense World Cup qualifier against South Korea, whose fans will receive a police escort after protests over Seoul's decision to deploy a controversial missile defence system.

The clash between the neighbouring countries is the most anticipated of Thursday's Asian games, which also include Australia's trip to face Iraq and Japan's revenge mission against United Arab Emirates.

But the match in Changsha takes place at a time of considerable bad blood with South Korea, which angered China when it agreed to deploy a US missile defence system in response to concern over the growing missile threat from North Korea.

The Chinese team's parlous position raises the stakes still further: they are rock-bottom of Group A and staring at elimination from the Russia 2018 World Cup - despite the government's no-expense-spared drive to turn the country into a football powerhouse.

Chinese officials have urged fans to "display rational patriotism" for the game against South Korea, who are second in the group and whose supporters have been warned to stick together for their own safety.

"Treat victory like defeat with reason. Express your emotions in a civilised and peaceful way," the Hunan Sports Administration said.

Its deployment sparked a backlash against Korean retail giant Lotte, which has been forced to shut dozens of stores in China, while a survey indicated China has overtaken wartime coloniser Japan in a list of South Koreans' most disliked countries.

The political row is an added irritant for Chinese supporters who have watched their team struggle in the final qualifying pool, with no wins in their five games and only two goals so far.

China's World Cup-winning coach Marcello Lippi, hired together with his team on reported pay of $20 million euros a year, knows his 86th-ranked team's chances of qualifying are slim.

Only the top two in the six-team group gain automatic entry to next year's World Cup, with the third-placed side going into a play-off series, meaning defeat in Changsha would leave China in need of a miracle.

The Chinese side has only won once in 31 attempts against South Korea, and although they caused a few jitters in their 3-2 defeat in Seoul in September, they haven't scored in their four qualifiers since.

"If you look at the group standings and head-to-head record, we have superior results against China," said South Korea's coach Uli Stielike, according to Korea's Yonhap news agency.

"I asked our players not to be intimidated and keep the ball in possession." Helong Stadium, the venue for Thursday's match, has stepped up security ahead of the match. On Wednesday afternoon, a three-metre high fence surrounded the training pitches behind the venue, which was patrolled by groups of as many as 20 security guards.

About 180 South Korean supporters are expected at the stadium, and they have been urged to take "extra caution" to avoid causing trouble.

"South Koreans staying in or visiting China must ensure they cheer on the national team in as orderly a fashion as possible," South Korea's embassy in Beijing said in a safety warning to fans, Yonhap reported.

The Korea Football Association said Chinese police would escort South Korean spectators, who had agreed to travel together and only wear their official "supporters' uniform" inside the stadium.

"For our players, they will receive the usual protection involving police officers when they travel from the airport to the hotel and to the match venue," said Seol Dong-Cheol, spokesman for the KFA.

Meanwhile in Group B, UAE-hosted Japan are looking to build on their shock 2-1 win over the four-time Asian champions in Saitama in September.

"All we're thinking about is beating Japan again because that's the key to qualifying for the World Cup," said UAE midfielder and Asian player of the year Omar Abdulrahman, according to the FIFA website.