Football: Wondolowski hat-trick as US romp in Gold Cup 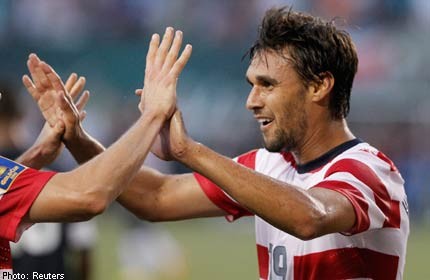 Chris Wondolowski of the US reacts to goal against Belize during their CONCACAF Gold Cup football match in Portland, Oregon July 9, 2013.

PORTLAND, OREGON - Chris Wondolowski notched a first-half hat-trick to set the United States on the road to a 6-1 triumph over Belize Tuesday in their opening match of the CONCACAF Gold Cup.

Wondolowski scored in the 12th, 37th and 40th minutes to give the United States a 3-0 lead. Ian Gaynair pulled one back for Belize in the 42nd minute, but veteran Landon Donovan converted a penalty in the second half and delivered decisive passes to scorers Stuart Holden and Michael Orozco as the United States wrapped up the rout.

In the first-ever meeting between the two countries, San Jose Earthquakes striker Wondolowski became the third US player to tally a hat-trick in a Gold Cup match, joining Brian McBride and Donovan.

In the first match of the night's Group C double-header at Jeld-Wen Field, Michael Barrantes scored two second-half goals to spark Costa Rica to a 3-0 victory over Cuba.

Barrantes fired a left-footed shot past Cuban goalkeeper Odelin Molina to open the scoring in the 51st minute. Jairo Arrieta doubled the score in the 70th and Barrantes made it 3-0 in the 76th.

The regional tournament continues on Thursday in Seattle when Panama face Martinique and Mexico and Canada square off in Group A.

Both Mexico and Canada will be trying to bounce back from opening upsets.