From forest to plate: An introduction to Orang Asli cuisine 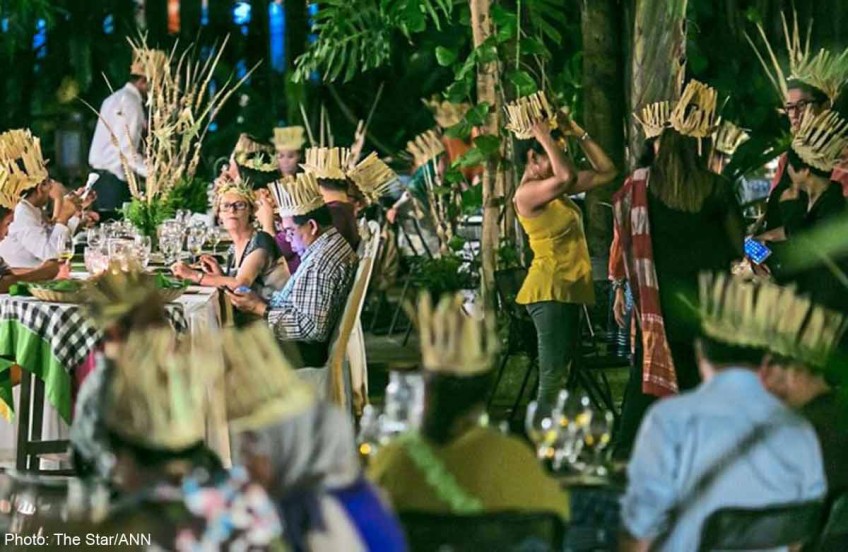 For your next party, would you consider an Orang Asli theme? There are beautiful possibilities, as Ramli Ibrahim and Sabera Shaik proved at a recent Orang Asli dinner party held at Sutra House in Titiwangsa, Kuala Lumpur.

Guests were welcomed at the gate with a crown (tempok) and sash woven with palm fronds in geometric patterns - some so intricate and pretty they garnered envious glances from other guests.

The haunting song from a nose flute fluttered across the lawn and hung in the air, casting enchanting spells into the night.

The Temiar, who call themselves the people of the forest, often engage in singing, dancing and music to celebrate the joy of gathering.

Songs come to the Temiar in a dream, via animated spirits in their environment. And the timbre of the flute invoke spirits from their slumber within leaves, barks and trees.

Thus awakened, the scene was set for an evening celebrated through music, crafts and food of the Orang Asli, the first people of Peninsular Malaysia who now make up less than 1 per cent of the population.

The Night of Authentic Temiar Cuisine by the Orang Asli of Santih in Perak, was hosted by actress Sabera in association with Sutra Foundation, Jabatan Kemajuan Orang Asli (Jakoa) and Yayasan MyNadi & Semesta Orang Asli Malaysia.

Leading the Orang Asli team was Busu Ngah, the DJ of Asyik FM of RTM.

Deer meat wrapped in leaves and slow-cooked in bamboo.

Ubi kayu kennem is a fritter made of grated tapioca that has been soaked in water for several days until it ferments. The result is a chewy texture, a slight whiff of fermentation and a more wholesome, cultured food.

Chief cook Busu Adik said the fried tapioca are what they often have for breakfast or a snack back in the village. I thought it could be quite delicious served with a dip, but that's just my urban palate talking.

"This is the first time that we are cooking in the big city," Busu said, eyes shiny.

The preparation had started weeks before with the gathering of firewood and bamboo logs from the forest fringe. The best firewood for cooking is hardwood from the rambutan tree.

In a pinch, other dried woods like bamboo and branches can be used. For this dinner, Busu said his team of eight cooks from the village followed the traditional Temiar way of cooking food in bamboo.

"But we are free to mix [ingredients and seasonings] when we cook. We can use whatever is on hand. We line bamboo with leaves to cook rice. We don't always take spices. Chilli is not from the forest; it is not our traditional food. But we have learnt to like it."

The Temiar of Santih has settled into a regular village routine and "only go into the forest if we need to look for specific items - like cane to build homes - but we will pick edible leaves whenever we come across them".

It's a good four to five hours' trek to reach the inner sanctum of the forest. For their daily needs, they have learnt to plant vegetables and fruit trees around their homes, buy from the local market, or forage in nearby growths of vegetation.

Traditional Temiar cuisine is cooked mostly in bamboo. Vegetables like tapioca leaves, forest ferns (paku) and palm pith (umbut bayas), and root vegetables like various types of tapioca and sweet potato, meat and fish, as well as rice, are wrapped in aromatic leaves, barely seasoned, and stuffed into lengths of bamboo and cooked slowly over an open fire.

The food is pressure-steamed inside the bamboo, cooking in its own juice. Everything is cooked at the same time, in different lengths of bamboo lined up against the smoldering wood.

"You know it is cooked when there is a lot of smoke coming out of the bamboo, but there should still be juice left inside," said Busu. The bamboo is split into two to serve.

"I like the food of the Orang Asli because it does not have the over spiciness that destroys the inherent taste of food," said Ramli, legendary Indian classical dancer, founder of Sutra Dance Theatre, and friend of the Orang Asli.

"I like raw things which do not have an imposed sophistication; this is what we are looking for with the foraging trend - sorry Europe, but we have always foraged!

"I have always been a dancer who is anthropologically curious. So I've always gone to visit the Mah Meri tribe in Pulau Carey, and later, the Temiar in Santih.

"Food came into the picture when we went to the village and asked them to cook. I realised then that we also have an Orang Asli cuisine.

"We are hoping to have a major Orang Asli festival later this year or the next, and I thought, why don't we look at the specific lifestyle where cooking is concerned.

"Most people do not truly know about the Orang Asli lifestyle and what is happening in their world; we thought this party would be a good introduction," said Ramli.

Busu Adik splitting the bamboo log to extract the food that has been cooked in it.

"The Temiar culture is a passive and gentle one and there is much we can learn from them about living in harmony with nature. They live a life that is organic and ecological with a low carbon footprint - everything is recycled or recyclable."

The plight of the Orang Asli has touched a chord with Ramli.

"When we went to visit the Orang Asli, we saw that the devastation from logging is total. A lot of biodiversity has been lost. The Orang Asli who are still foraging for food have been affected by the loss.

"Out of necessity, they have started to incorporate mainstream cuisine into their diet but I can see that they cannot afford our lifestyle. They are putting on weight due to the change in diet and lifestyle and it is not a change for the better.

"The way they have been asked to change will always put them at a disadvantage. The houses that have been built for them are insensitive to their needs.

"But we must have hope," said Ramli, who also desires that something good come out of the dinner event.

"I don't like appropriation," said Ramli firmly. "There is a kind of neocolonialism going on. We are forever looking at new things to commercialise - there is a danger in that. And I challenge that."

Among the unofficial sponsors of the evening was prominent architect Datuk Seri Lim Chong Keat. "Many people with good intentions are helping them, but this event is frankly staged; it is not the reality," he said.

"The sarong they are wearing is not in character. Even the cooking … they don't cook like this every day. But Ramli is looking at the cooking traditions that can be encouraged so it is fairly pioneering in that sense.

"Cooking in bamboo is fairly tribal and crossborder; common to people who have bamboo. The Temiar cook anything they want now; they have some nice dishes using maize - which is not native.

"But they must be able to differentiate between the genuine people who want to help them from the exploitative. Ramli and Sabera are doing it from their urbanised point of view, trying to bring them into the cultural mainstream. But tomorrow, when they go back, it will be just as before," said Lim, who has 15 Orang Asli working with him in botanical research.

"The urgent need is to get sustained development for them. Most of them are fugitives in their own culture as they can't earn a living there. There are no jobs for them in the oil palm estates as these jobs are now done by foreigners."

Underlining the noshing and partying is an agenda to call attention to the plight of the Orang Asli, whose habitat is being destroyed by logging and land clearing, leaving the community disoriented and displaced, uprooted from their ancestral land and traditional way of life.

Since the 60s, there have been efforts to integrate them into mainstream society, convert them from their animist belief and introduce agriculture to replace foraging and nomadic ways.

The idea now is that perhaps through food, we can provoke curiosity about the Orang Asli lifestyle and build solidarity with the indigenous people of this land.

The dinner started off with an appetising Belimbing Buluh Salad courtesy of Sabera, a fine cook in Ramli's books.

Appropriately, food was served on leaf plates - environment-friendly plates and shallow dishes from Falaleaf rose to the call - and fresh banana leaves lined the plates.

Set out in the garden, the long communal tables were decorated with handicrafts fashioned from dried fronds made by the Mah Meri. The nature-themed set-up was tasteful and quite beautiful.

But let's be honest here - you can't pluck a motley crew of cooks from the fringe of the forest with no tools and hope to produce a gastronomic affair. But chefs can help. Cooking in bamboo, when done right, produces delicious and juicy meats with a smokey taste that is on trend now.

The Orang Asli cuisine and art can serve as inspiration for gastronomic dinners that are truly representative of, and unique to, this land. The menu need not be authentic; it needs only be true in spirit.