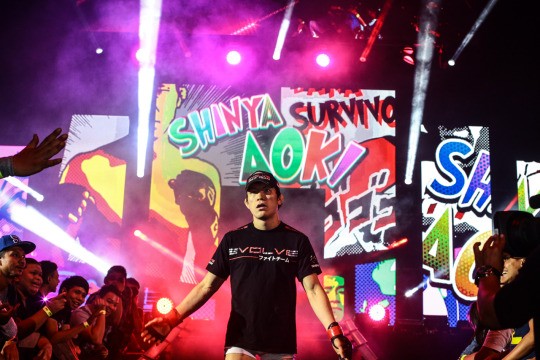 Japanese MMA legend and former ONE Lightweight World Champion Shinya “Tobikan Judan” Aoki of Shizuoka, Japan, will be making his highly-anticipated return to the ONE Championship cage this 26 May in Singapore.

It will not be in a mixed martial arts contest, however, but a Grappling Super-Match against legendary Brazilian jiu-jitsu world champion Garry Tonon of the United States.

The matchup is set to take place on the main card of ONE: DYNASTY OF HEROES at the Singapore Indoor Stadium.

Aoki was last seen at ONE: DEFENDING HONOR last November in an exhilarating matchup against the Philippines’ Eduard Folayang. Folayang defeated Aoki via third-round technical knockout to capture the ONE Lightweight World Championship. Immediately after the fight, Aoki expressed interest in returning to competition, stating that losing to Folayang was just part of the game as he thanked fans for all the support. Aoki is making good on his promise of getting right back into action, albeit in a grappling showdown with Tonon.

“Shinya Aoki is considered probably the greatest grappler in all of mixed martial arts. His ability to scientifically break down opponents on the mat is nothing short of legendary in the industry,” said Victor Cui, CEO of ONE Championship.

“At the same time, Garry Tonon is known as one of the most exciting Brazilian jiu-jitsu competitors in the world. The Aoki-Tonon Grappling Super-Match is certainly a matchup that fans will not want to miss.”

The 33-year-old Aoki is considered by many to be the greatest product in the history of Asian MMA. His professional mixed martial arts record certainly precedes him, having won a total of 39 bouts, with 25 of them coming by way of submission. He is also highly-regarded as perhaps the purest grappler in all of MMA. Tonon, on the other hand, has not tried his hand at MMA as of yet, but is one of the Brazilian jiu-jitsu world’s most exciting competitors. He is a multiple-time IBJJF World and Pan American BJJ champion, and is a prominent fixture in submission-only format competitions such as Metamoris, Polaris, and the Eddie Bravo Invitational. Tonon has been wrestling and grappling since he was 14 years of age.

Additional details regarding the Aoki-Tonon showdown have yet to be announced.