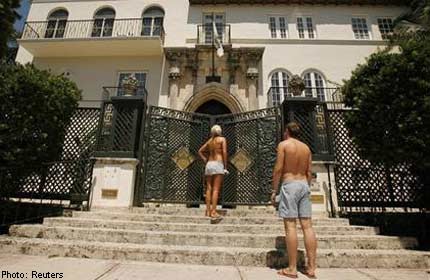 The Miami Beach mansion once owned by Italian fashion designer Gianni Versace and the site of his 1997 fatal shooting will be sold at an auction in September with bids starting at $25 million.

The 23,000-square-foot mansion, now known as Casa Casuarina, will go on the block at a bankruptcy auction on September 17, according to Lamar Fisher, president of the Fisher Auction Company. The auction will be held at the mansion.

Located on Ocean Drive, the property has been up for sale for more than a year with an initial asking price of $125 million. The price was cut to $75 million several months ago.

"This is the trophy property of the century," Fisher said.

Built in 1930, the 10-bedrooom, 11-bathroom home features a 54-foot (16-meters) mosaic pool lined with 24-karat gold. Many of the property's rooms are adorned with hand-painted frescoes, Italian marble and stained glass.

Versace bought the mansion in 1992. He spent $33 million renovating it and adding another wing.

In 1997, the designer was shot dead on the doorstep of the house by a man who later committed suicide.

The mansion's current owner is a Miami businessman who bought it in 2000. For several years, the property housed a 10-room boutique hotel. The hotel was closed earlier this year.