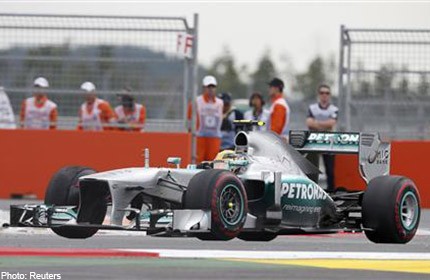 Red Bull's Vettel, who can clinch a fourth successive Formula One world title this weekend, lapped in 1:34.768.

Fernando Alonso, second in the standings behind Vettel, was sixth quickest.

Vettel can become only the third man to win four titles in a row on Sunday if he wins and Ferrari's Alonso fails to finish in the top eight.

The German has won the last four grands prix to open a 77-point lead with only 125 available from the last five races.

"I lost a wheel," he coolly informed his team over the radio, the bouncing projectile well snaffled by marshals as it headed towards a wall.