Formula One: Home comforts for Rosberg 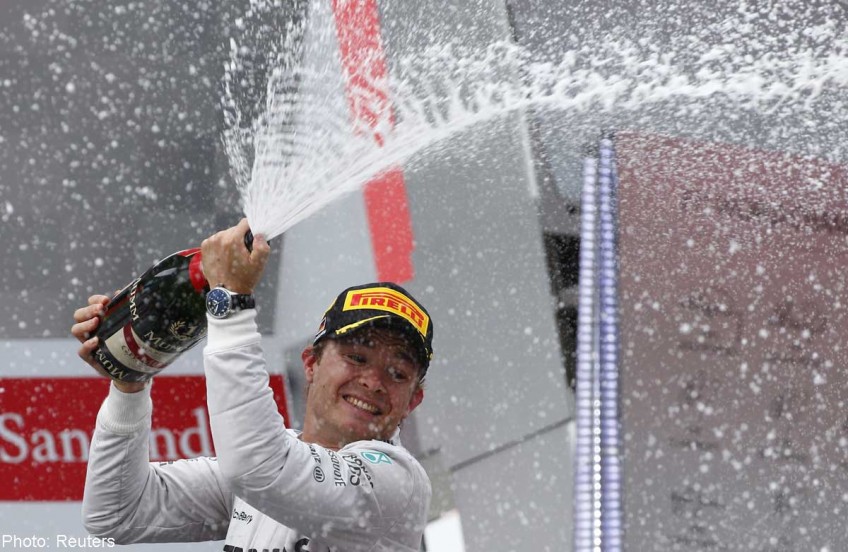 Nico Rosberg completed a memorable week for himself and his nation last night when he cruised to his first win in his home German Grand Prix yesterday.

The pole-sitter, cheered on by Germany World Cup football winner Lukas Podolski in the Mercedes pits, extended his lead to 14 points over teammate Lewis Hamilton, who charged up to finish third from 20th on the grid.

"It's an amazing feeling to win at home. It's a very special day," said Rosberg.

Splitting the Mercedes men in second was the Williams of Valtteri Bottas.

Rosberg came home a comfortable 20.7 seconds ahead of the Finn at the end of an enthralling 67-lap contest. Hamilton was only 1.8 seconds behind Bottas ahead of defending champion Sebastian Vettel of Red Bull, Fernando Alonso of Ferrari and Daniel Ricciardo, in the second Red Bull.

Rosberg's win came after a week in which he had married his long-term girlfriend Vivian Sibold, signed an extended contract with Mercedes and celebrated Germany's World Cup victory.

It was his fourth win of the season and the seventh of his career.

But even such joyful supremacy was overshadowed in an incident-filled race by the bold passing pace of Hamilton, who started at the rear of the grid following his high speed crash in qualifying.

The Englishman delivered a thrilling series of dramatic moves muscling his way through the field but, in the end, was unable to grab second in the closing laps as Bottas hung on to register an historic podium for the resurgent Williams team.

"I had great fun," said Hamilton. "I did as good as I could. It was hard to get through the pack safely... it was hard to overtake, so I'm glad to get some points today."

On one passing move, Hamilton's car clipped the McLaren belonging to Jenson Button.

"I had a little bit of a collision with Jenson," he reflected.

"I thought he was going to open the door which he has done a couple of times lately, but that was my bad judgment."

Another German, Nico Hulkenberg of Force India, finished seventh ahead of Jenson Button and his McLaren teammate, Danish rookie Kevin Magnussen, and Sergio Perez who finished 10th in the second Force India.

There was drama at the start when Felipe Massa, starting from the second row, somersaulted spectacularly after his Williams was bumped at the first bend and came to rest in the safety gravel.

The Brazilian walked away unscathed but was clearly frustrated as the accident was triggered when Kevin Magnussen's McLaren clipped the rear of his car.

At the British Grand Prix at Silverstone last time out, his race ended prematurely when in a collision with Kimi Raikkonen's out-of-control Ferrari. Only rapid avoiding action by Massa prevented a far more serious crash.

In the Canadian Grand Prix last month, Massa accused rival driver Sergio Perez of being "dangerous" after the Mexican had caused their collision.

Brazilian Massa had tried to pass Perez for fourth position as they approached Turn One when their cars collided, an impact that sent both into the barriers at high speed.