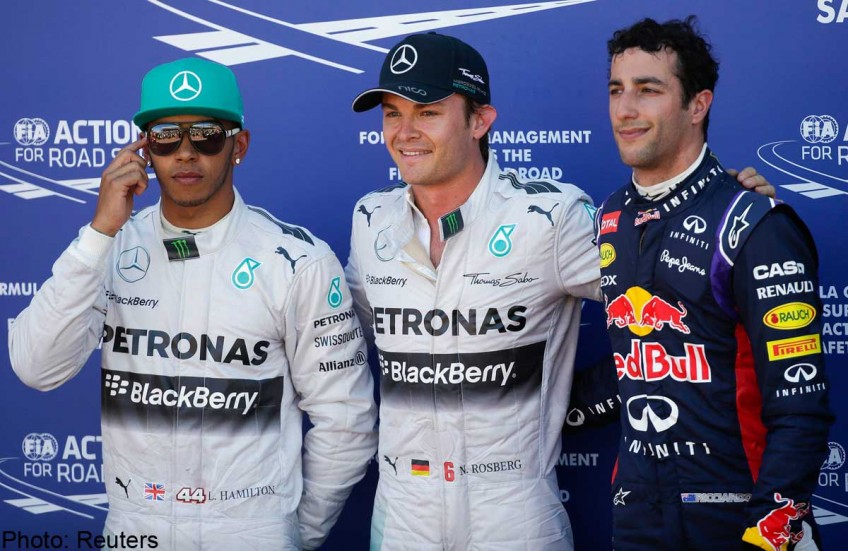 HOCKENHEIM, Germany - Mercedes team boss Niki Lauda is preparing for tough times ahead as he seeks to ensure fair play and good behaviour from Lewis Hamilton and Nico Rosberg in their world title scrap, starting with this weekend's German Grand Prix.

Three times world champion Lauda, who is non-executive chairman of the Mercedes outfit, expects the competition between championship leader Rosberg and Hamilton to intensify.

The pair are separated by only four points following Hamilton's win at his home British Grand Prix on July 5 when Rosberg suffered his first retirement of the season with mechanical problems.

Looking ahead at what is effectively the team's home race, Lauda said: "Everything is reset like before Lewis had his second retirement (in Canada) and, now, they will fight to the end - like you would not believe - to be world champion. And, I will have a hard time.

"We will not interfere. This is very important. We didn't interfere from the beginning, so why should we now? So it will be interesting to watch now, because they are exactly at the same level." The German contest marks the halfway mark to the season, the 10th race out of 19, and it will be fascinating to see how the pair react to the pressure of the title race as the final races unfold.

In the opening nine races, Hamilton had five wins and two retirements while Rosberg has had three wins and just one retirement, but proved himself to the more consistent race-finisher overall.

Lauda added that he does not fear for Hamilton's consistency in any way.

"Everybody has highs and lows. Look at (Sebastian) Vettel. Vettel is a four-time world champion and he moaned and bitched over the last eight races, so if there is one guy with more lows, then it is Vettel.

"These things happen, and I think too much is put in to this. Lewis was, from the beginning of the season on a good level, a stable level, and Nico I have to say has improved.

"After Monaco, Nico had everything going for him and this is what happens in sport when people fight at the highest level. Nico had everything going for him and Lewis dropped back one millimetre. Now Lewis is back on track, so I tell you, the next couple of races are going to be interesting." - 'What a week' - ================= Lauda's team on Wednesday confirmed that Rosberg had signed a "multi-year" contract extension, an announcement designed to boost the team and Rosberg's mood ahead of their home event.

"What a week!!," tweeted Rosberg. "I got married, Germany won (the World Cup) and I signed a new contract with mercedes! Just need to win my home GP now." In recent years, the German Grand Prix has been an excuse for a festival to celebrate Vettel's domination, but this time he travels to Hockenheim five places and 95 points adrift of Rosberg.

But he remains adamant that he will continue to believe in and fight for his title defence despite Mercedes complete supremacy this year.

"If you look at the points and mathematics, we can still fight for the world championship, so it would be stupid to say we're out," explained the Red Bull driver.

"Being realistic, Mercedes is in a position where it can win every race and get a one-two, without having people bother them too much unless things are going wrong.

"Our target is to catch up and beat them sooner rather than later, but the gap is very big so therefore it's difficult to close it in a short amount of time.

"I've never really stressed at any point in the season to focus too hard on the championship, I've really gone race to race and tried to get the best out of myself and the car."