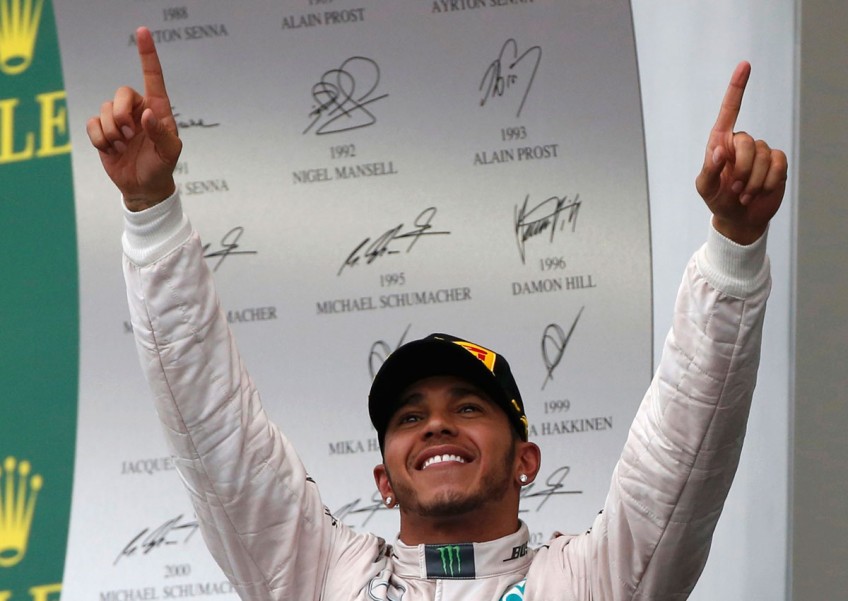 As his Mercedes team celebrated all around him, soaking him in champagne, the 30-year-old Briton reflected on his role model status and his hopes and inspirations in the aftermath of an astonishing race and achievement.

"This is the greatest moment of my life," Hamilton told his team in the emotional moments after he crossed the line to add the 2015 title to those of 2008 and 2014.

Later, he said he felt moved to have realised a dream in matching Senna's achievement in winning three championships.

"For me, that was the target," he said. "I wanted to get the three that Ayrton had. He wasn't from the same country as me, but he was the guy who inspired me as a youngster.

"Now, I don't know what is going to come next. There is nobody else I look to who I want to emulate and I feel like I've got the baton for myself and Ayrton and I will carry that on and see how far I can take it." After feeling deeply emotional after the race, he told a news conference: "I'm so overwhelmed right now. I remember my first British Championship and when my dad drove me home.

"We were singing 'We Are The Champions' in the car as we drove home. I owe so much to them - my mum, my dad, my family for all that they sacrificed for me." Hamilton's father Anthony and family were not in Austin to see him win the race and take his third title, an absence that the champion addressed by sending messages to them at every opportunity.

Asked about his dreams and his role, he said: "I want to encourage young kids. It is about the self-belief they have.

"Hopefully this will inspire parents. I wanted to be Ayrton Senna or Superman when I was younger and I hope that they feel the same and don't give up on their dreams.

"I can't believe I am here now and I thank my fans for supporting me all over the world and I know that this is a platform to inspire people, young people - never give up on your dreams hopes and desires." Hamilton snatched victory when Mercedes teammate Nico Rosberg ran wide on lap 49 to open the door to his third title.

"Today, so many times, I thought I'd lost the race. With the Safety Car and Nico was so quick, but I just never gave up," said Hamilton.

The champion said the crazy nature of the race was emotionally draining.

"Those last laps, the world championship is right there, and I'm thinking 'am I going to get it?' "Everything I have got from these years, everything I have built up, I was so close, I could smell it, so I was pushing.