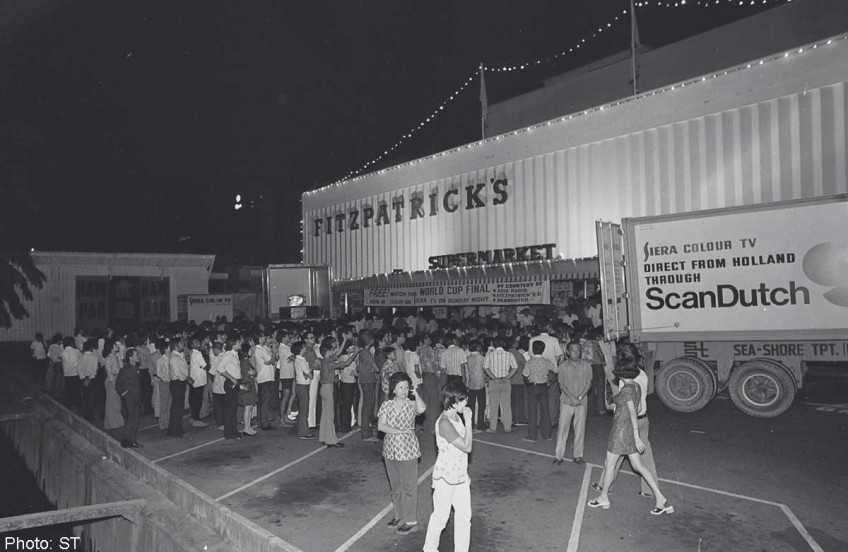 Prohibitive colour TV prices drove fans to the now-defunct Fitzpatrick’s supermarket in Orchard Road to catch the 1974 World Cup final between West Germany and the Netherlands.

A group of Indians, holding packet drinks, were halted by the closed door of the multi-purpose hall. Moments later, a quartet of Chinese arrived, blissfully unaware that the group stage had concluded a day earlier and that there was no World Cup screening that night.

No anger, no recrimination. Just spontaneous laughter from these football lovers and an acknowledgement that they should have checked the fixtures first. Gathered around a dustbin, of all things, the two groups chatted about the artistry of Neymar, the dentistry Luis Suarez needed and how useless the England team were.

Apart from their interest in the Beautiful Game, what these Singaporeans had in common was that they were all returning to the past to watch the future unfold in Brazil.

Prices for packages from pay-TV operators have escalated in the last eight years. In 2006, it cost just $10.50 to watch the World Cup. This went up to $88 in 2010 and, this year, SingTel charged $105 to watch the 64-match tournament. That is more than double what fans in Malaysia paid and more than five times the price in Hong Kong. It was entirely free-to-air in Thailand.

Resisting the telcos, many Singaporeans flocked to public screenings. From community clubs and fast-food restaurants to pubs and the Sports Hub, crowds packed these places to the gills. Even with yesterday's final shown free-to-air, they still showed up with jerseys, flags and painted faces.

It was not that different four decades earlier.

The 1974 final between West Germany and the Netherlands in Munich was the first live broadcast to be shown in colour.

Local nostalgia website Remember Singapore recalled that in the 1970s, imported brands such as Sharp and Telefunken cost as much as $3,000 per set while Setron, from a local manufacturer, was the cheaper alternative at $1,800.

When it was announced that the final would be shown in colour, crowds gathered outside the now-defunct Fitzpatrick's supermarket in Orchard Road because they could not afford the newfangled device to see why these Flying Dutchmen were called the Oranje.

Communal viewing had been a staple of daily life when Singapore was still in its infancy as a republic. People gathered at community centres to watch television, where the prized device was mounted high on a platform and secured under lock and key.

Behind those metal doors, the goggle-box held the very thing craved by Singaporeans in the 1960s and 1970s - televised football.

As the country became more affluent, watching matches from the comfort of homes became the norm - until the telco prices shot up. In the past, it was the TV that was expensive. Now, it is the invisible airwaves that are priced out of the reach of many.

Which makes these free public viewings a godsend.

The People's Association said its screenings were a smash hit, with 570,000 residents visiting 58 community clubs to watch the games. It noted that some had even taken food and drinks for the staff as a gesture of thanks.

Some schools around the country allowed their students to sleep over on Sunday night before waking up in the wee hours to watch the final, which sparked joy for the lucky ones from these cool schools and envy from those who were not.

As Singaporeans spend less time together, what with e-mail and smartphones invading their lives, the World Cup has seemingly "reunited" them and made them socialise in a way that was unexpected.

The screenings became a chance for them to watch the games collectively, to talk football with fellow fans and to cheer loudly without worrying about disturbing the neighbours.

Perhaps pay-TV is not such a bad thing after all. The prices are now far from what many can afford but, in a way, they have brought many Singaporeans closer.