Fresh apricots that taste like '1st brush with love' 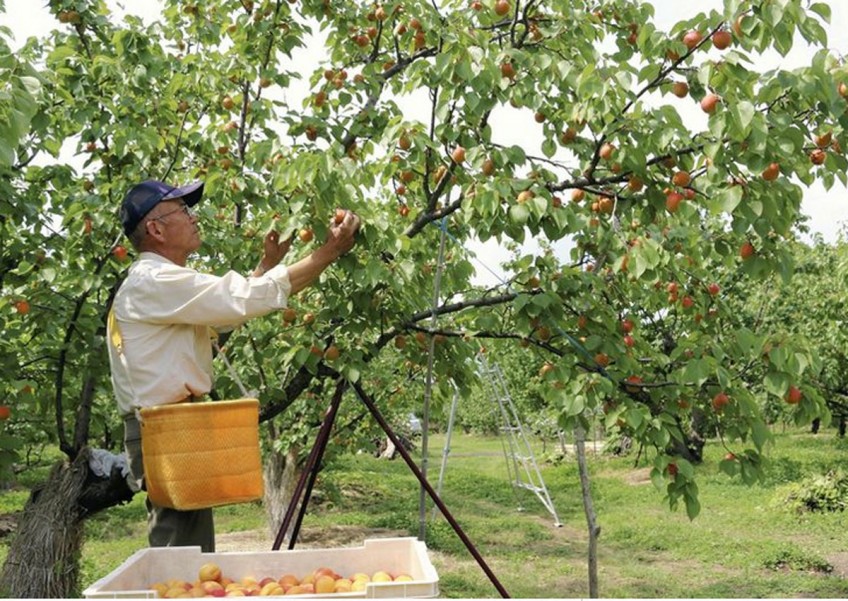 CHIKUMA, Nagano - In late June, apricots look ready to be picked on the trees. At one time, apricots used to be cultivated mainly to make jam and other processed foods. Recently, however, a sweeter variety that can be eaten raw has become popular. I visited a grower who has been cultivating these apricots in Nagano Prefecture, a major production area.

In the mid-Edo period (1603-1867), people were encouraged by rulers of the Matsushiro domain to grow apricots. Now, the prefecture boasts a production volume comparable to Aomori Prefecture. Chikuma serves as the prefecture's major apricot production area and is referred to as "Apricot Town."

While the harvest season is usually from late June to mid-July, this year's harvest season started about one week earlier than usual thanks to the good weather, and the apricots are reportedly of fairly good quality.

Tadaaki Shimada is a 13th-generation farmer whose family has been growing apricots in the mountainous area of the city since the Edo period. In his field, about three-meter-high apricot trees bear orange or red fruit six or seven centimeters. After Shimada said, "Please eat it as is," I picked one of the apricots and bit into it. It was sweet, and there was no hint of any sourness.

"This is a North American variety called Harcot, which is to be eaten straight off the branch," Shimada, 71, said. "While apricots have been grown mainly to make processed foods thanks to its strong sour taste, the Harcot variety changed all that."

The production volume of apricots has been declining due to the aging of farmers and other factors. The prefecture's production volume has fallen by more than half to 986 tons from 2,000 tons in 1970, according to a survey by the Agriculture, Forestry and Fisheries Ministry in 2012.

Growers are doing everything they can to cultivate apricots that can be eaten raw. The demand for such apricots has been increasing annually, and they can be sold at rates about three times higher than apricots meant to be processed.

Shimada started growing Harcot apricots about 10 years ago, and the number of Harcot apricot trees has been increasing each year. Of the 160 trees of eight varieties owned by Shimada, 35 trees are of the Harcot variety. The shipping volume of Chikuma and the neighbouring town of Sakaki increased to about 38 tons in 2014 from four tons in 1999.

However, the variety is difficult to cultivate. Apricots are easily influenced by weather, and the Harcot apricots are more vunerable to diseases than conventional varieties. In addition, they easily crack or split before they become ripe.

"As the time of apricots ripening coincides with the rainy season, some of the apricots contract a disease that makes the surface of the fruit brown, making them unmarketable," Shimada said.

Therefore, he has been trying to grow new varieties - "Nikonicot" and "Ohisamacot," both of which were registered as varieties by the National Agriculture and Food Research Organisation in 2013. These varieties were created by crossing a North American variety and a conventional Japanese variety, and reportedly are resistant to diseases and easy to cultivate.

Shimada started growing several trees of the new varieties in 2013 and last year harvested five kilograms of the two varieties for the first time.

"Both varieties have a stronger sour taste than the Harcot variety, but there is a favourable balance between sweet and sour," Shimada said. He will study the characteristics of their cultivation and the timing of the harvest in the future.

Apricots are a low-profile fruit compared with peaches, apples and grapes. However, Shimada said, "Apricot's sour-sweet flavor is often called 'the flavor of your first brush with love' and is especially liked by women. I hope young women like the unique flavor and eat more of the apricots raw."

Apricots meant to be eaten raw spoil rapidly, so they should be eaten as soon as possible. If they are not eaten on the same day, keep them in a refrigerator. Shimada said he likes eating the apricots by cutting a chunk out and topping it with yogurt.

To make jam, core the apricots, top with sugar and leave them for about one hour. Then cook them over medium heat in a saucepan while constantly stirring to prevent burning.

Next, simmer them for about 40 minutes while removing the scum. Keep the jam in a jar that has been sterilized with boiling water and seal off the jar. The jam should be kept at room temperature. The amount of sugar should be about half the volume of the apricots.