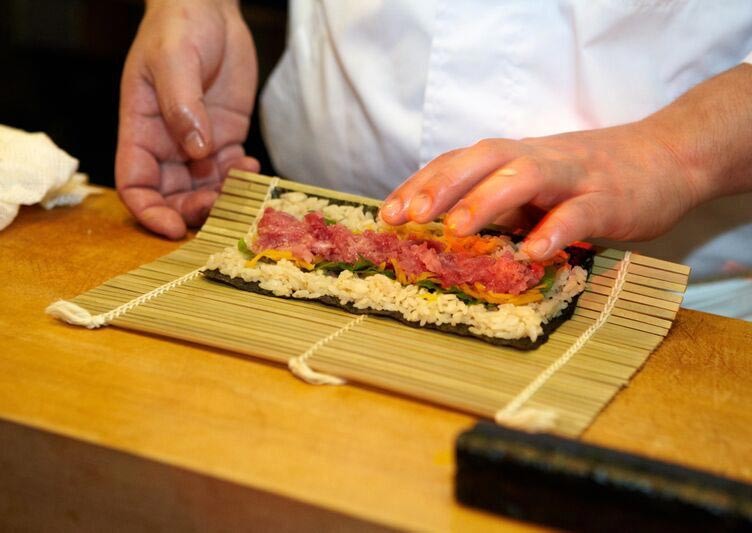 If the Michelin guide really does come to Singapore, the Emmanuel Stroobant (ES) restaurant group could be the first to get a toehold in by default. It is teaming up with the Hong Kong-based three Michelin-starred Sushi Shikon to open a branch in Singapore by the end of the first quarter of 2016.

Sushi Shikon is also the first overseas branch of Tokyo's Sushi Yoshitake - one of just three sushi restaurants in Tokyo with three Michelin stars. Chef-owner Masahiro Yoshitake has had his three stars since 2012. The Hong Kong restaurant is helmed by Yoshiharu Kakinuma, who was mentored by chef Yoshitake before moving to the former British colony.

Although the ES Group has never had a Japanese restaurant, co-owner Edina Hong has been thinking about it for years, and more recently when the group hosted Hideaki Matsuo of Kashiwaya in Osaka. Finally, through "a friend of a friend of a friend", the opportunity arose to do a joint venture with Sushi Shikon.

Despite the proliferation of sushi restaurants in Singapore, "the ones I have been to in Japan seem a lot smaller and more personal than what I have seen here", says Ms Hong. "I would like to recreate something similar and I believe diners would also like the same."

The plan is to open an eight-seater counter with a private room for six people, she adds. "We are still looking for a location, but from the guidelines, it should be in a location where there is weekday and weekend traffic as the restaurant will aim to open for both lunch and dinner. We are in discussions with a few landlords but nothing is cast in stone at this point."

How much a meal will cost has not been decided yet. "We will have to take our cue from the other branches, as well as what is palatable for the locals and then there is cost of bringing in the seafood. So until we find a suitable location, we're not even thinking about the pricing."

Going by the prices in the two-year-old Hong Kong restaurant - which is located in the Mercer Hotel - it could well be eye-watering. According to its website, a nigiri sushi lunch course will set you back HK$1,800 (S$325) while only one omakase menu is offered for dinner priced at HK$3,500 (S$636). This is in contrast to a meal at chef Yoshitake's Tokyo flagship which starts at around 23,000 yen (S$265).

Still, the pricing hasn't deterred well-heeled Hong Kongers, who have no problem paying such a high premium for a taste of Michelin-starred sushi. Whether the same situation would apply here in Singapore, where the average high end sushi lunch runs in the S$120 to S$200 range, and S$300 upwards for decent omakase, will be another story. And it will be an interesting test case of just how high prices will go if the Michelin guide makes it here. After all, as a spokesman for the restaurant says: "We expect to make the Singapore restaurant unique and better!

He won't be in Singapore but at least Kuala Lumpur isn't that far away for Singapore sushi aficionados to get their fix of Takashi Saito's three Michelin-starred prized morsels.

The chef of hot favourite Sushi Saito is set to open his first restaurant outside of Tokyo next year in the six-star St Regis hotel in KL Sentral. To be called Taka by Sushi Saito, it's targeted to launch on April 1 when the 48-storey skyscraper opens its doors.

How St Regis KL's owner Chua Ma Yu and his family managed the culinary coup remains unclear, but they will be unstinting in ensuring the authenticity of the upscale, high-premium Japanese restaurant.

Traditional finishes include a sushi counter made from rare hinoki wood from Japan. The counter can seat only 16 diners, but there are two private dining rooms.

Given Mr Saito's reputation - he is the youngest sushi chef to be awarded the three Michelin-star rating in 2009 and is the owner of one of only three sushi restaurants in Tokyo with the coveted three stars - reservations may be as hard to come by as they are in Tokyo. Sushi Saito was also ranked one of San Pellegrino's Asia's 50 Best Restaurants.

Even so, because all ingredients will be imported from Japan, the restaurant's pricing will not be for the faint-hearted.

"Chef Saito insists that all ingredients have to be from Japan to maintain authenticity and standards, and will pick it personally in Tokyo and send it to Kuala Lumpur every Tuesday and Friday," revealed Carmen Chua, the chief executive of ONE IFC Sdn Bhd. ONE IFC is the developer of the St Regis Hotel & Residences Kuala Lumpur.

Many of the chef's fans are already familiar with his signature style - his preference for slightly smaller cuts of fish, as well as a touch more salt and milder red vinegar in the rice to set off his ideal combination of texture and flavour. His tuna nigiri is a particular favourite.

The Kuala Lumpur restaurant will be headed by chef Satoshi Uehara who was handpicked by chef Saito after an extensive search. He will be assisted by sushi chef Masashi Kubota.

"Chef Saito has assured that chef Uehara will be able to serve food that lives up to his reputation," Ms Chua said, adding the former will also go regularly to Kuala Lumpur to ensure quality is consistent. He is scheduled to visit in February, and will be at the opening as well.

A Taka by Sushi Saito restaurant in Singapore may not be a too far-fetched proposition given that the Chuas hold the exclusive rights for Malaysia and Singapore.

A former stockbroker, Mr Chua remains a prominent investor through his flagship CMY Capital Group, which owns 60 per cent of ONE IFC.

This article was first published on November 7, 2015.
Get The Business Times for more stories.