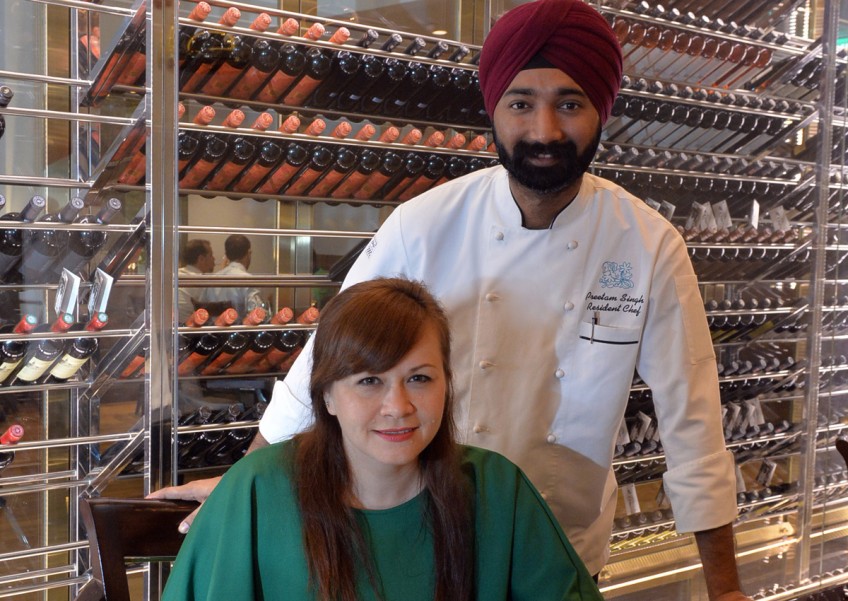 This modern Indian fine-dining restaurant has moved out of its Duxton Hill shophouse space to a grander, bigger home in National Gallery Singapore.

Gone are the vibrantly coloured wall murals of the old outlet. The new 2,000 sq ft, 70-seat space has a pared-down contemporary look, with bronze and champagne gold mirrors and light casings.

But the cuisine remains the same - a mix of progressive Indian food and traditional curries and dishes.

Next to Saha is a new casual pre- dinner lounge bar called British Raj Lounge. The 1,000 sq ft space will open next month and serve Indian street food with tipples.

The restaurant's managing director, Ms Natalia Makarova, 39, says the new location has better traffic. "We receive a good flow of walk-in customers from the gallery's visitors and staff and from the Supreme Court nearby, as compared with being in Duxton Hill, which was more of a destination dining location."

There has been more interest in innovative Indian cuisine, she adds.

"Mention modern cuisine, and people usually think of French and Italian food. We want to show that Indian food can also be sophisticated, tasty and not too heavy."

The menu has popular dishes from different regions in India, including Tamil Nadu, which is known for curry and coconut milk-based dishes; and Kashmir, where dishes are heavy on spices such as saffron and cardamom.

New dishes make up about a third of the menu. They feature nonIndian ingredients and cutting- edge techniques, such as spherification, which is a process of shaping liquids into little balls.

Dishes include pan-seared sous vide duck that is marinated with pepper and kokum, a sour fruit from South India; stuffed Kashmiri morel mushrooms; chicken kebab and foie gras garnished with fruit, pistachio and gold leaf; and a masala chai brulee. Prices of main courses range from $26 to $40.

The new dishes are the brainchild of Indian celebrity chef Abhijit Saha. Sorrel in Boon Tat Street made the news in October when its up-and- coming executive chef Johnston Teo quit.

The establishment is in the news again, as it will be replaced by a new concept restaurant called Cheek by Jowl.

The Modern Australian restaurant opens next month and will be helmed by Australian chef Rishi Naleendra, formerly the head chef of Maca restaurant at Tanglin Post Office.

On his departure, he says: "When I first signed up at Maca, I knew it might end early this year as we took the lease over from the previous restaurant, Feedlot, with only eight months left.

"This time limit would not be enough for me to take the restaurant in the direction I wanted. I've always had plans to open my own restaurant."

His signature dish of duck and waffles at Maca - previously available only on Sundays - will be a permanent item on the menu at the 40-seat Cheek by Jowl.

The menu will be kept simple and offer a list of contemporary starters and shareable mains.

Chef Naleendra will also be working around the seasons and you can expect dishes such as wild venison with fermented plums and wasabi, rabbit leg with parsnip and beach herbs, and barramundi with burnt lemon and onions. His wife, Manuela, will be the restaurant manager.

Like Sorrel, Cheek by Jowl is part of the Unlisted Collection group of restaurants by hotelier Loh Lik Peng. Other restaurants under the group include 5th Quarter, The Market Grill and Restaurant Ember.

Chef Naleendra had contacted Mr Loh, who had dined at Maca when it first opened, when he was planning to leave and wanted to open his own restaurant.

His culinary experience includes working in Australian restaurants such as Taxi Kitchen in Melbourne as well as Tetsuya's and Yellow, both of which are in Sydney.

He and his wife came up with the name Cheek by Jowl as a"homage" to their 10-year relationship. The 140-seat restaurant with six private dining rooms takes the space vacated by the now-defunct Paradise Pavilion by the Paradise Group in Marina Bay Link Mall.

New dishes include a combination of chilled foie gras with Japanese sake, chilled abalone and deep-fried prawn ($32 a person); chilled yellow Sri Lankan crab with Chinese wine (seasonal price); roasted suckling pig rolled with black truffle rice ($20 a piece, $168 for half, $288 for whole); and tea- smoked Peking duck ($78, whole). Average spending for a person is from $50 for lunch and from $80 for dinner.

The full a la carte menu will be launched after Chinese New Year. A smaller a la carte menu is available now. The premium wine list is curated by Master of Wine Tan Ying Hsien of Taberna Wine Academy.

Crystal Jade Prestige is the only new opening planned for this year as the group refreshes its other concepts.

Other brands under the group include its chain of mid-range Crystal Jade Kitchen outlets, Crystal Jade La Mian Xiao Long Bao and bakery Crystal Jade My Bread. Some of the brands which closed last year include Crystal Jade Pristine at Scotts Square and Crystal Jade Viet Cafe at Bugis+.

The group is also looking to expand in Indochina, including Vietnam, Cambodia and Myanmar, as well as China. New openings slated for this year include Crystal Jade Garden of Dreams - comprising a fine-dining restaurant and a Crystal Jade La Mian Xiao Long Bao - at the upcoming Shanghai Disney Resort, as well as Crystal Jade Shanghai Delights in Seoul, South Korea.

On the changes, a spokesman for Crystal Jade Culinary Concepts says: "We will continue to fine-tune our fine-dining and casual-dining brands with menu refinement and changes, proposed renovations for our older restaurants and new looks for our upcoming outlets.

"We hope these changes will appeal to a new and younger consumer clientele as well." Jinzakaya aims to draw crowds with its take on the izakaya, featuring trendy interiors and a wide menu including grilled mains.

When: Noon to 3pm, 7pm to 2am daily, opens tomorrow

The Les Amis Group kicks off the new year with an izakaya, which takes over the space that previously housed the group's popular Vietnamese casual eatery Nam Nam Noodle Bar. It is located beside sister outlet Sushi Jin.

The restaurant group's spokesman, Mr Raymond Lim, believes that trendy izakayas will be the next big thing over the next couple of years.

He says: "Izakayas are not a new concept, but nobody has really taken them to the next level. Jinzakaya will transform people's perception of an izakaya as a dingy Japanese 'salary man' drinking bar with no frills and low bills to a trendy dinner alternative for fun dining."

For dinner, pick from a selection of skewers (from $2.50 a stick) such as chicken thigh, chicken mid- wing joint, foie gras and Wagyu beef. Grilled main courses include kurama ebi bacon ($20), king prawn wrapped in bacon; and Australian Wagyu (100g, $60).

Complete the meal with a drink from a selection of beer, sake, shochu and fruit-based sakes.

Other brands under the group include its flagship Les Amis restaurant, Japanese eateries Aoki and Shabu Shabu Gen, and Peperoni Pizzeria. After two years, the owners of French restaurant group Saveur are closing their Italian restaurant Concetto to focus on their first love and more profitable business: casual French food.

Opening on Feb 1 and taking over Concetto's 80-seat space in The Cathay will be the third outlet of the Saveur chain of eateries.

Co-owners Joshua Khoo and Dylan Ong want to return to their original aim of "providing affordable French food to the masses" when they started out in a Joo Chiat coffee shop in 2011.

Besides revitalising the menu, they also want to return to being chefs in the kitchen.

The other two Saveur outlets are in Purvis Street and Far East Plaza. There is also Saveur Art, an upmarket version of Saveur, which opened in October 2014 in Ion Orchard.

Also, Concetto was seeing 10 to 15 per cent lower sales compared with Saveur.

Mr Khoo says: "A common point that came up in customers' feedback at Concetto is that they prefer the food at Saveur as our French food has more variety than starch- heavy pasta."

New dishes will be introduced at Saveur every four months instead of the current six. The chefs hope to include pates and terrines.

Last month, four new dishes, such as seafood bisque, escargot with tomatoes, chorizo and bread, and oven-roasted half chicken with buttery Savoy cabbage, were introduced.

The chefs do not rule out reviving Concetto one day. Mr Ong says: "We will keep the Concetto signage in our office to remind us to develop and bring back the brand."

This article was first published on January 24, 2016.
Get a copy of The Straits Times or go to straitstimes.com for more stories.