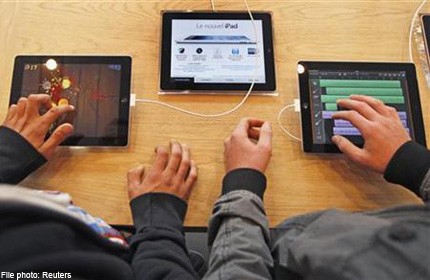 MOSCOW - Gazprom, the world's biggest gas producer, is offering to pay up to 119.7 million roubles (S$4.67 million) for a bespoke tablet computer for its chief executive, Alexei Miller, documents posted on the Gazprom web site said.

The tablet would be based on the iOS operating system and support 3G, GPRS and wi-fi transfer technologies, be able to download information in less than 15 seconds and protect commercial data, the documents showed.

The Apple platform-based tablet will help Miller, a close ally of President Vladimir Putin, access data essential to Gazprom's day-to-day operations, such as gas output and exports, the documents said.

At the height of the resources boom a Gazprom tender included a solarium and bath for horses, according to press reports.

Sergei Kupriyanov, spokesman for Gazprom, said that the tablet is not "just a computer" and must help Miller solve complex issues while protecting commercial secrets.

"We'll see how the tender process goes and whether someone can do it at a cheaper price," he said when asked why Gazprom had offered almost US$4 million to create the tablet.

Russian companies are obliged to publish information on tenders, a measure designed to prevent corruption.

Bids to make the iPad will be accepted until July 22.

"Based on its budget, it will be an epic device. Just wondering if Miller himself will needed? Maybe he should be optimised?" someone named mclayton commented on the website.

Gazprom's shares changed hands at 125 roubles on Tuesday, a third of their value seen at the peak in May 2008, as investors baulk at the monopoly's high costs and shrinking market share.