Gerrard the villain in a van Gaal masterpiece 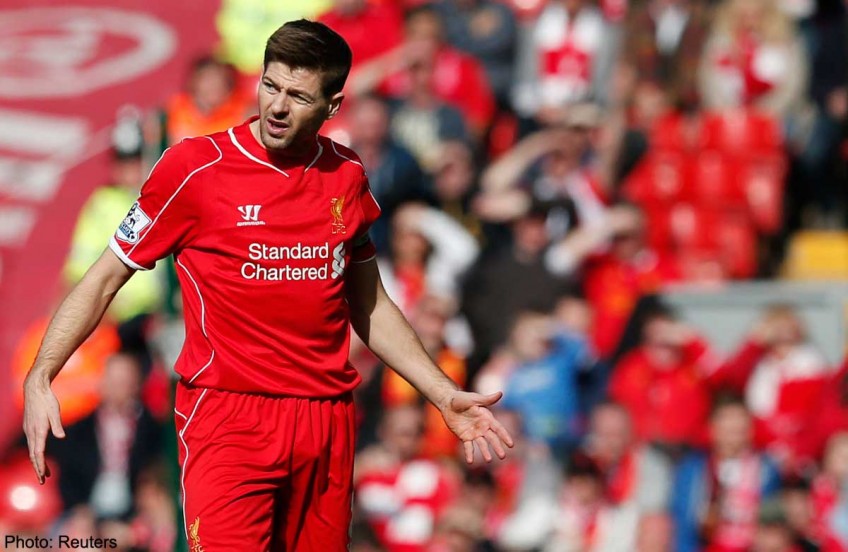 He is one of the best players ever to grace the English Premier League (EPL) but after Sunday, most people will remember Steven Gerrard mostly for his 40-second swan-song against Liverpool's greatest rivals - Manchester United.

Sadly, the Reds legend has only himself to blame.

Down 0-1 at home in a must-win tie, Liverpool manager Brendan Rodgers would have thought that bringing him on at the start of the second half would galvanise his team and help the Reds to at least salvage a point.

But with a needless stamp on United midfielder Ander Herrera, the Liverpool captain received a straight red card.

The 34-year-old admitted his error after the match. He said: "I need to accept it. The decision was right. I've let down my team-mates and the fans.

What Gerrard did is not acceptable in any match, let alone his last against their fierce rivals United, but I can understand how he felt.

The former England captain, who will be moving to the Los Angeles Galaxy to play in Major League Football, made his last start for the Reds over a month ago in a 3-2 win over Tottenham Hotspur.

In my last season for Tampines Rovers in the S-League, I rarely got a place in the starting XI. Like Gerrard, I had to sit on the bench and if I was fortunate, I got to play late in the second half.

Watching on from the bench frustrates you, especially if the team are not doing well.

It would have hurt Gerrard to see the way United dominated Liverpool in that first half.

But that is no excuse for what he did and Liverpool have to suffer the consequences.

Five points behind fourth- placed United (59), Rodgers' side have to travel to the Emirates Stadium after the international break and I don't see them getting anything against an in-form Arsenal.

That would almost certainly rule Liverpool out of the coveted Champions League places and potentially consolidate United's spot in the top four.

Much has been made about the way van Gaal has set up his United side this season, but he has shown his experience and quality where it has most mattered - at the business end of the season.

Fellaini bossed the aerial battles and gave the physically inferior Emre Can a torrid time. The Belgian won everything that was lofted up towards him.

Young continued his fine form and was an asset both in offence and in defence, tracking back at every opportunity.

If you are not performing, then you will not play - van Gaal is ruthless in his team selection. This is the hallmark of a great manager.

All he needs now is a 20-goals-a-season striker. Something Falcao could not provide and what an ageing Robin van Persie cannot offer any more.

Things are finally looking up for United fans all around the world.

The same cannot be said about Liverpool supporters. They would probably be as downcast as Gerrard was when he walked off the Anfield turf.