To get our politics right, get the people sector right 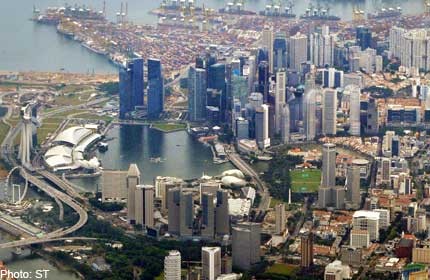 An aerial view of Singapore.

SINGAPORE - Two weeks ago I was in a room with people whose work is critical to Singapore's well-being.

No, they were not political leaders dealing with important national issues. Nor were they captains of industry whose million-dollar decisions might make a difference to the economy.

They were attending the annual members conference of the National Council of Social Service (NCSS), which is an umbrella body of more than 400 organisations helping the less fortunate in Singapore.

I was there as a guest speaker to tell them that, though they have not figured much in the recent soul-searching in the country, they hold the answers to many of the questions being raised.

My message that day, to put it bluntly, was this: If Singapore doesn't get its people sector right - that's the sector they are in - it won't get its politics right.

After 48 years as an independent nation, it is time we give this sector the recognition it deserves instead of treating it as a minor appendage to the public and the private sectors.

Why do I think the people sector is so important?

I believe a large part of the problem the country faces at this stage is that there isn't as strong a sense of community as there ought to be.

When a people do not believe enough that they belong to one community with an identity they are proud of, they will pull in different directions, they won't look after one another, and they will tend to behave as selfish individuals.

Sociologists have a term for this - social capital.

Singapore has a serious shortage of this, and it shows up in at least three areas - in volunteerism, donations to charities and membership of civil-society organisations.

In volunteerism - which means actively doing more to help fellow citizens - Singapore ranks so poorly according to an international survey by the World Giving Index, it is downright embarrassing.

Last year, it was placed 114th, almost bottom of the class, and way behind its ASEAN neighbours, including Indonesia (seventh), the Philippines (17th) and Thailand (26th).

The National Volunteer and Philanthropy Centre's own survey shows that more people are volunteering now compared with the past, so there has been progress, but not enough to improve Singapore's world ranking.

The recent announcement of the setting up of a volunteer youth corps will, hopefully, boost the numbers.

The survey also asked how much people give to charities and other causes. Singapore was ranked 53rd, again well behind South-east Asian countries.

In the area of philanthropy, Singapore's new rich have not been as generous as the old Chinese tycoons.

There is a separate survey called the Asian Barometer Survey, which measures how active a people are in civil-society organisations.

Done in collaboration with the National University of Singapore, the 2011-2012 study showed fewer Singaporeans involved in these organisations compared with other places in the world.

Taiwan, for instance, had more than six times as many people in proportion to its population belonging to public interest groups, 2.5 times in charities, three times in religious organisations and five times in political parties.

South Koreans were also much more active in these organisations.

What happens when there is less involvement in the civic life of a country?

The result is a weakening of community ties and the level of trust in the society.

It is made worse because the public and private sectors, which dominate life here, tend to pull individuals in opposite directions.

A free market economy like Singapore's tends to encourage an individualistic, winner-takes-all behaviour.

A first-past-the-post democratic system can similarly lead to an adversarial and divisive society, especially if the people have not developed the instincts needed to resolve their differences peacefully.

It is in the people sector that citizens cultivate the values needed to work together for the larger good. When they are involved in protecting the environment, or looking after the sick and elderly or vulnerable foreign workers, they identify more closely with the community they belong to and the responsibilities that go with being a member.

Such a community is more likely to get its politics right.

This was what the late American management guru Peter Drucker said: "The knowledge sector has to have three sectors - a public sector of government, a private sector of business and a social sector.

It is becoming increasingly clear that through a social sector, a modern developed society can again... give individuals a sphere in which they can make a difference in society and re-create community.

"Modern society and modern polity have become so big and complex that citizenship - that is, responsible participation - is no longer possible. All we can do as citizens is to vote once every few years and to pay taxes all the time."

He was referring to the United States, supposedly the greatest democracy in the world. But if even the Americans cannot depend on their public and private sectors to promote community and citizenship, what hope for Singapore?

Hence the importance of developing the people sector.

How to do so? There is much that can be done, and those in the sector should contribute their ideas, but two areas are worth considering.

First, we need to recognise the importance of this sector beyond what it does to help the less fortunate. For too long Singapore society has given short shrift to civil-society types.

Indeed, in the earlier years, they were treated with much suspicion, as people who had their own independent ideas which might get in the way of what the Government was trying to achieve.

To be fair, there is greater appreciation of their work now, and civil society is more vibrant than it used to be. But, as the international surveys show, a great deal more needs to be done.

In the annual National Day Awards, for example, the top honours usually go to those who have contributed in the public sector.

More such awards should be given to those in the people sector to signal the importance of their work.

Second, the people sector can do more to advocate its causes and participate more actively in national discussions on important issues.

Public discourse here should not be dominated by only the political parties or by the pro- and anti-government crowds or it will end up making the country even more divided.

The people sector will add a richer layer of more diverse voices made up of people who have a keener sense of community.

If Singapore is indeed at a turning point in its history, as the Prime Minister put it in his National Day Rally, it is time to give this sector the recognition it deserves.