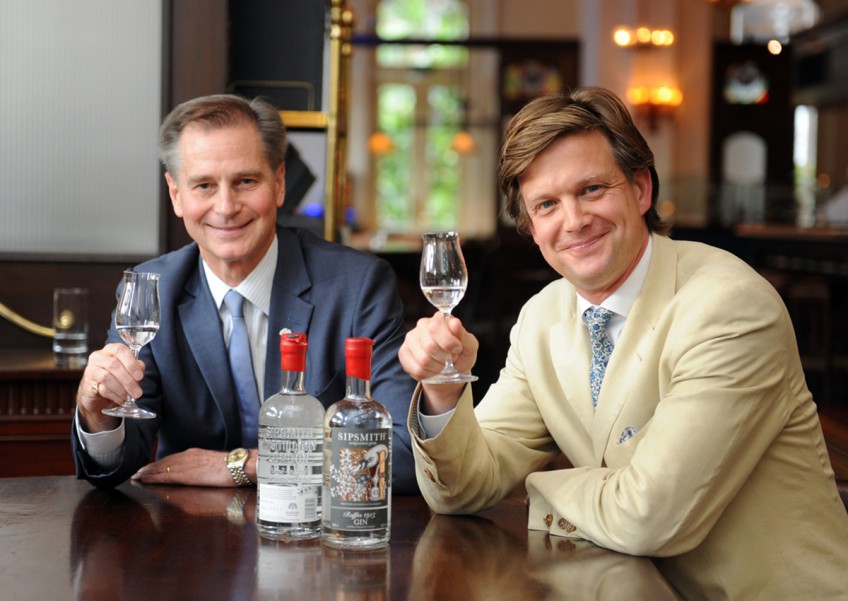 Raffles Hotels & Resorts commemorated the 100th anniversary of the iconic Singapore Sling cocktail last year with a customised gin crafted by British spirits company Sipsmith. However, this collaboration is not a typical one between a heritage hotel and a bespoke spirits distiller.

Sipsmith's co-founder Sam Galsworthy is a descendant of the founder of modern Singapore, Sir Stamford Raffles, after whom the hotel is named.

In fact, his name is Stamford but he is known as Sam.

He recalls that he and his two sisters were brought up learning about Sir Stamford, having seen artefacts such as his notes and writing desk in his family home in Cornwall.

The 39-year-old says: "Sir Stamford was an extraordinary explorer and it was very relevant to bring the gin in during the 50th anniversary of Singapore's independence. As a teenager, the remarkable history and stories that we heard about him and Singapore made my hair stand."

He was in town in November last year to launch the Raffles 1915 Gin.

He says he jumped at the chance when Raffles Singapore approached him to come up with a gin that was inspired by the Singapore Sling, a pink gin-based cocktail created by Hainanese bartender Ngiam Tong Boon.

The gin is served at all the bars and lounges in Raffles Hotels & Resorts worldwide.

Mr Simon Hirst, general manager of Raffles Singapore, says that having an in-house gin label is a good way to build on the history of an iconic cocktail that has put Singapore on the world stage.

"Finding out about Mr Glasworthy's blood relations with Sir Stamford was the clincher for the project," he adds.

Inspired by Sir Stamford's interest in botany and cultivation of spices, the Raffles 1915 Gin is made with botanicals found in the Malayan peninsular - jasmine flowers, pomelo peel, lemongrass, kaffir lime leaf, nutmeg and cardamom.

These botanicals are distilled alongside those found in a classic gin, such as juniper, coriander and orris root. The spiced gin has the warmth of sweet orange spice coupled with an elegant, bright and balanced finish.

The gin is made with the traditional one-shot method. Instead of mixing alcohol to dilute large amounts of botanicals to make high volumes of gin, the one-shot method involves adding a precise amount of botanicals in the pot still so that it is distilled to produce small batches of gin, which is mixed with spring water before bottling.

According to Mr Galsworthy, this method gives the gin more viscosity and a smoother mouthfeel.

After five months of development and experimenting with 30 production batches, his team is satisfied with the gin that carries the Raffles name.

He says: "I am full of pride about coming up with a gin that ensures the legacy of Sir Stamford lives on."

This article was first published on January 10, 2016.
Get a copy of The Straits Times or go to straitstimes.com for more stories.