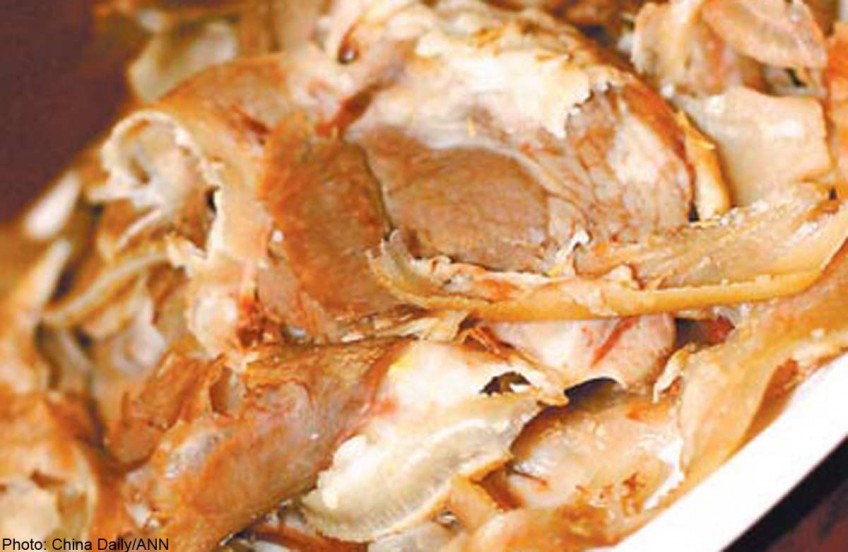 Some Chinese believe people can replenish different parts of their bodies by eating the same part of an animal. So don't be too surprised if, on a visit to Northwest China's Ningxia Hui autonomous region, you are served a boiled goat head, possibly with two innocent goat eyes staring back at you.

This Ningxia specialty is generally only served by local people to the elders in their families or to guests from far away - to show their respect and warm welcome. The goat's head is not only seen as the most delicious and nutritious part, it is also believed that it will benefit the diner's brain and eyesight.

A well-cooked goat head will be cut into pieces instead of maintaining the shape of a head, says local chef Ma Yaohong. Three parts of the goat head - the brain, eyeballs and tongue - would be served with a variety of side dishes. If diners are not told they are being treated with goat head, he insists, they will not realise it from the shape and smell.

Ma, 46, has been cooking goat heads since he was a teenager. He says the most delicious part is the pair of eyeballs.

"We always said we would cook all night just for a pair of eyeballs," says Ma, owner of Zheng Zheng Hong Restaurant, an Islamic food restaurant in Yinchuan, the region's capital.

He says that unlike eyeballs of fish or other species, the eyeball of a goat is just like any piece of meat from the animal: It is tender and juicy, with no smell of mutton. The eyeballs need to be eaten with sauce made with salt, vinegar and garlic, he says.

The brain, meanwhile, tastes just like tofu. Ma suggests mixing salt and pepper or chili into the brain and eating it with a spoon.

Ningxia has a large population of Hui people, who have developed their own Muslim food traditions with local features ever since Islam came to China. Scholars say Islam expanded gradually across the maritime and inland silk routes from the 7th to the 10th centuries through trade and diplomatic exchanges. Chinese Muslims, they say, have been an integral part of the country's society for 1,400 years.

Beef and mutton are the two most popular foods of local people, as well as for tourists who are eager to sample the authentic regional fare.

The boiled goat head is not as popular in Yinchuan as more local specialties such as hand-grabbed lamb. Ma says that back in his hometown of Guyuan city, where more Hui people live, a meal of goat head is more common.

Ma moved from Guyuan to Yinchuan in 1996. His restaurant now serves many specialties of the Hui people and has even attracted some foreigners, including a surprised visitor from an Arab country.

Martin Morck, a frequent visitor to China from Norway, was in Ningxia last year and was also excited to be offered a goat head－a sheep head served whole is common in some parts of Scandinavia - by his hosts on a business trip.

"We were each served a generous big plate of goat head and beer. It's very fat and delicious, especially the chin and lips," he tells China Daily.

"You take both sides of the upper jaw and break the skull in two, so you have access to the brain. Yummy!

"Eaten with a lot of fresh, low-alcohol Chinese beer, it is a sensation," he adds.

Ma adds that he once worked for a hotel in Guyuan, which hosted many high-ranking officials including the late State leader Zhao Ziyang. "Among many local special dishes, we also prepared goat head for those guests."

To cook such a dish is not so easy. Ma says he only selects goats raised in Ningxia that are around 40 to 60 days old. The best weight is around 8 to 10 kilograms, he says.

"The best time to eat goat is from the start of October to the next year's Tomb-Sweeping Day holiday," adds Ma. "In this period, goats only eat dry grass instead of green grass. A goat eating dry grass has the best meat, tender with no smell."

The goats are killed in the special Islamic or halal way, with no blood left within the bodies. Then the skin and the meat are separated with a knife and by blowing air into the goat's body "just like a balloon". Unlike in the southern part of China, he says, people in Ningxia don't eat lamb with skin.

After the head is cut off, the rest of the goat can be used for other dishes, he says.

"Then you have to soak the goat head in cold water at least twice, cleaning all the blood left; the first time requires at least one hour," says Ma. "And then we can start to boil the head and put seasonings into it."

It takes Ma three to four hours to cook.

Ma says the flavor may be affected by the ingredients used when boiling. Different chefs have different recipes: The goat head is traditionally cooked using onions, garlic, ginger, chilies, herbs and other seasonings. The delicacy is not unique to China or even Central Asia. One old Italian tradition calls for goat head to be served to the bride and groom on their wedding day.

The chef says some friends have urged him to open restaurants in cities outside Ningxia, but he has declined all offers.

"The most important part of cooking is finding the right material," he says. "In other cities, I cannot find the best goat, and all the goat head I cook there will not be the same as in Yinchuan."

Mike Peters contributed to this story.