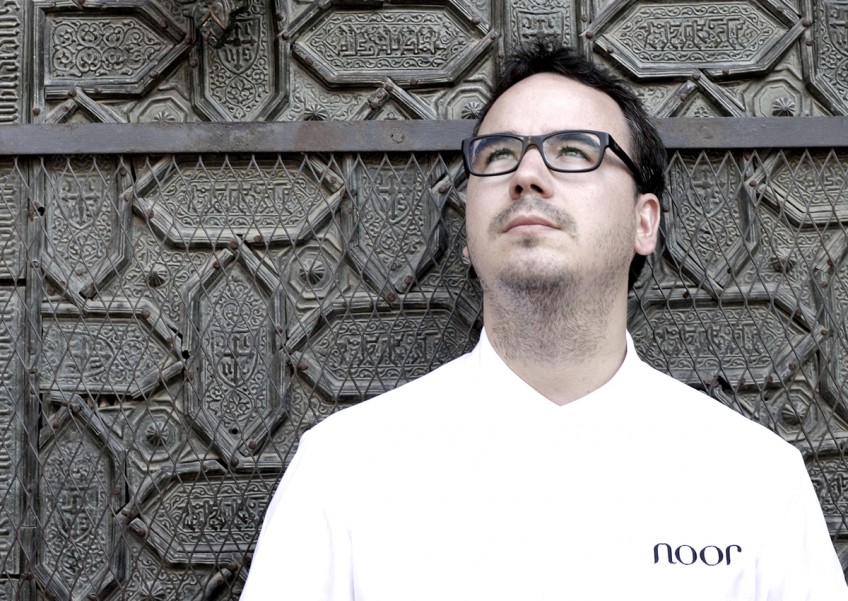 When it comes to European cuisine, restaurants serving halal options on a fine-dining level are not the most commonly heard of.

Enter 34-year-old Spanish chef Paco Morales, who aims to pave the way to what he calls "high kitchen" for halal cuisine with his new restaurant Noor. It is set to open next month in his hometown of Cordoba in Andalusia, southern Spain, and is already fully booked until February next year.

Diners at the restaurant can order the halal set menu, alongside other diners eating from a non-halal menu that the restaurant will also offer. According to the regulations in Spain, says the chef, the dishes will be prepared in the same kitchen, but in a separate section using completely different equipment.

Morales may have earned his culinary accolades working at acclaimed Spanish restaurants such as Mugaritz and elBulli, but his cuisine at Noor takes on a strong Arab and North African influence.

Over the past five days, diners here got a sneak peek at Noor's dishes. Morales was in Singapore for the first time as part of the ongoing 4xFour dining series which runs until Nov 20.

4xFour is organised by the same team that runs casual outdoor festival Savour. Limited seats are still available to try the cuisine from other acclaimed chefs cooking for the 4xFour event at The White Rabbit at 39C Harding Road.

Morales says that having a halal option will not take away from the dining experience at Noor.

For example, his dish called Perfecto-Imperfecto de Maiz - which is sphere of corn mousse filled with crab and smoked herring caviar, dusted with smoked bacon powder - will simply do without the bacon element for the halal menu. It was served at 4xFour.

He says: "No pork, no wine, no problem. The dishes can remain similar, it is up to our creativity."

Some of his favourite ingredients to cook with include argan oil, rose water, saffron, turmeric, cinnamon and cumin.

The Christian chef had his sights set on taking halal cuisine to a new level after the closure of his four-year-old restaurant Ferrero in 2013 due to financial issues. In 2010, Ferrero - which served modernist Spanish cuisine - was awarded its first Michelin star. He is also the consulting chef for Al Trapo in Madrid, Spain, which serves "informal haute cuisine".

While his past experience working with the likes of elBulli chef Ferran Adria has shaped his style of "creative cuisine", Morales' decision to go halal was largely influenced by his hometown of Cordoba. Back in the 10th century, it was a predominantly Muslim society.

"My cuisine will be influenced, and influential to the culture in Cordoba. I want to recreate what it was like then," says Morales, who emphasises the need to pay attention to the melting pot of cultures in the region - from Arabs to Christians and Greeks.

The soft-spoken chef grew up in a family of cooks and picked up cooking from his father. His parents still run their 30-year-old deli- restaurant Asador de Nati, which serves traditional fare such as beef oxtail and roast chicken with vegetables. Two of his three sisters, aged 33 to 39, work at the restaurant.

His 29-year-old wife handles the administration and finances for Noor. They do not have children.

Lamenting that there are not enough halal restaurants in Cordoba, Morales hopes that more business owners will follow in his footsteps.

He says: "To develop the business and culture of Cordoba, we need more halal restaurants."

This article was first published on November 2, 2015.
Get a copy of The Straits Times or go to straitstimes.com for more stories.