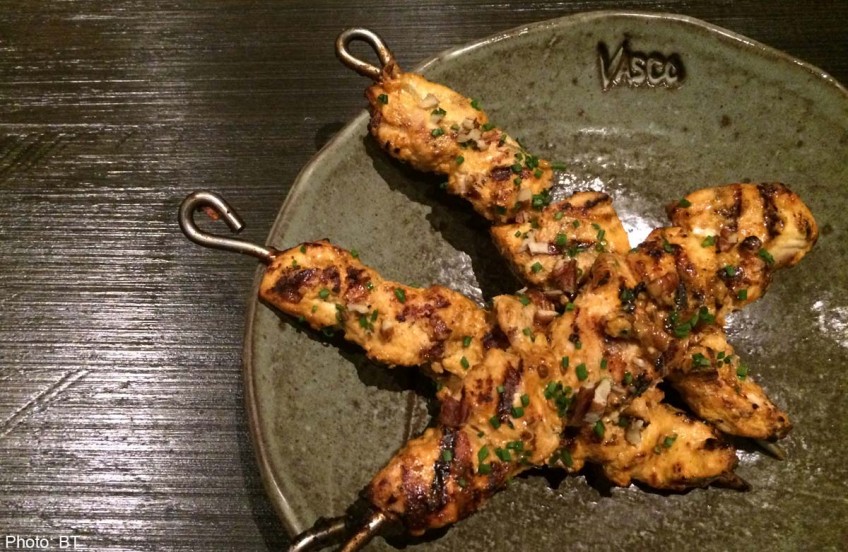 After a four year stint as the head chef of Esquina - Jason Atherton's tapas bar on Keong Saik Road which ramped up the hipster F&B scene in Singapore - Andrew Walsh has parted company with the Michelin-starred chef and leading restaurateur Loh Lik Peng to venture out on his own.

"Esquina was a great restaurant and of course I loved it. But in life you have to have a change of scenery and progression," says chef Walsh over the phone from Europe, where he was looking at potential new restaurant spaces with Joel Fraser, his new business partner and founder of three-year-old bar The Cufflink Club.

His departure is an amicable one and ex-boss Mr Loh understands his need for greater challenges which his restaurant group could not offer "as we have just too much on our plate to contemplate another major opening". But, "he's been a great asset over the years and of course we are sorry to see him go".

Even as chef Walsh scouts around for opportunities overseas, his first project in Singapore has already hit the ground running and caters to a growing interest in Peruvian cuisine.

Called Vasco, the concept behind Latin American cocktail bar on Hong Kong Street is "very simple", says Chef Walsh, who is the executive chef at Vasco responsible for designing their menu.

"It's a Latin American bar, and the food is inspired by snack food from the region like ceviches, the Cuban sandwich, and empanadas from Argentina with chimichurri." Vasco is overseen by the third partner in the business - Christian Hartmann, who was Mr Fraser's right-hand man at The Cufflink Club and now general manager of Vasco.

The menu is straightforward, with highlights such as chicken skewers (S$23) with pecans, chipotle and lemon, a salmon ceviche (S$20) with ponzu and avocado and a bit of wasabi for kick, and baked empanadas with spiced lamb, cumin and yukon potatoes (S$12 for three, S$17 for five).

According to chef Walsh, the inspiration for the food at Vasco came from a trip to Rio de Janeiro last year when he went to watch the World Cup. He spent three weeks travelling around the region trying out different styles of the cuisine and doing research.

As for authenticity, he says: "To cook a different cuisine you don't have to be born there. It's about respecting the ingredients, respecting the traditional ways of making it... This is a small concept that's about having fun for our guests, but of course it'll be true to the flavour of Latin America and I do hope it does promote Latin American food in Singapore."

Don't expect to see chef Walsh in the kitchen there every night however. Instead, Vasco will be manned by head chef Jennifer Lee who also founded Sarnies cafe in Telok Ayer.

Instead, Chef Walsh is preparing for his big project - an upcoming restaurant named Cure which he will be cooking at personally, although he would not reveal any details apart from the fact that it will be located in Keong Saik Road and is scheduled to open in June.

When asked if they had any more plans down the road, he says: "Vasco's opened and that's it for now. When we're back (in town) we'll get our hands into that. And then we have Cure coming up and the future will dictate what will happen.

"I'll do one project at a time, sign it off and make sure it's good and be happy with it. But Cure is where I'm going to be cooking."

Joo Chiat Road has always been dubbed a popular dining destination especially for its ever-changing landscape.

One of the latest additions is a three-storey modern Brazilian barbeque restaurant, Braseiro, which serves a fusion of Latin American cuisine and casual French dining. It was opened at 333 Joo Chiat Road in mid-March, by 26-year-old Alexandre Pini from France.

"I have been to Brazil and fell in love with churrascaria. So when I opened Braseiro, I chose Brazilian food because I loved the concept as a customer," says the self-taught chef, who holds a degree in engineering.

Mr Pini first came to Singapore three years ago on a school internship, and decided then and there to make it his home. He explains: "When I first came here, I thought Singapore is a small but very interesting island.

With three MRT stations, you can travel from Shanghai (Chinatown) to Delhi (Little India) to New York (Raffles Place). It's clean, safe, and has good dynamics for a business - these were very attractive to me.

"My dream has always been to create my own company, and to do that, I need to master every part of the occupation - including the cooking. So I added my personal touch of casual French cooking in order to keep my food simple, cosy and affordable," he adds.

The structure of Braseiro's menu is kept very simple - customers pay a fixed price of S$19.90 and choose either a beef steak, beef skewer, roast chicken, or that month's chef's specialty.

The meal then comes with free-flow french fries and salad. It's his way of slowly kicking off the business, and leaving some allowance for them to eventually grow and develop it further, says Mr Pini.

"It's my first real experience at this occupation, so this (simple menu) allows us to master our recipes and change often to satisfy every palate. It's a big challenge for us and we love it, but we also are realistic and need few months to experiment and perfect things," he adds.

This article was first published on May 9, 2015.
Get The Business Times for more stories.